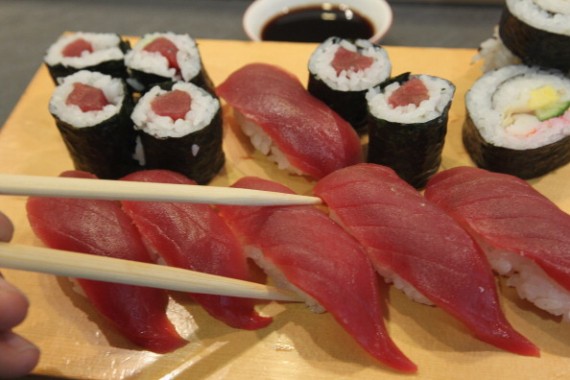 BERLIN - NOVEMBER 23: Sushi from yellowfin, or maguro, tuna lies on a customer's plate at a sushi restaurant on November 23, 2010 in Berlin, Germany. Yellowfin tuna is mostly fished in the Atlantic and is among the cheaper and more plentiful varieties of tuna.
(Photo : (Photo by Sean Gallup/Getty Images))

Eating hamburgers is part of the American culture. Through the years, we've seen the amazing evolution from the simple beef patty to many other different varieties. But lately, one burger is making a name for itself, the sushi burger.

Telegraph reported that "sushi has gone from a posh dinner out to a lunchtime staple - and people are always finding new ways to consume it, firstly in burritos and now in weird burger hybrids."

The sushi burger has also taken over Instagram. Hundreds of posts about it are now trending.

"Restaurants and food fanatics all over the world have been creating their own take on the Sushi Burger, and it can't be long before it finds a way to one of our chains in the UK."

That's the fun thing about sushi burger, there's no specific restaurant or food chain that caused Sushi Burger to trend. People are making their own version and hashtagging them on Instagram. Currently, there are hundreds of versions you can see on the internet.

Sushi is a Japanese dish basically composed of vinegar-flavored rice with raw fish, usually, tuna or salmon garnished with vegetables and egg. It is a Japanese delicacy which made its way to the world. However, due to the fast-phased life in the city, the sushi had already taken a lot of form like in a salad and now in a burger.

To make a sushi burger, chefs and enthusiasts shape rice into a burger bun. Rice in its normal state is a bit difficult to shape and eat that's why others are frying them to make a better bun. Telegraph said, "Also included are traditional sushi components, like raw fish, ginger, seaweed and wasabi, but with a burger shop twist - so some versions include pulled pork and pickles while others include a big, juicy burger patty."

The finished product may look Instagram-worthy but definitely a bit more difficult to eat compared to your typical burgers. But for sushi-lovers, that won't be a problem. It might be harder to eat, but definitely healthier and have lesser fat content as well. "It certainly doesn't seem to have the face-shoving, juice-dripping qualities of a burger carried in a sturdy bun."

If you want to try your hands in making a Sushi Burger, Sutter home released a recipe you can try at home.

How to Properly Grill Fresh Corn Without Burning It