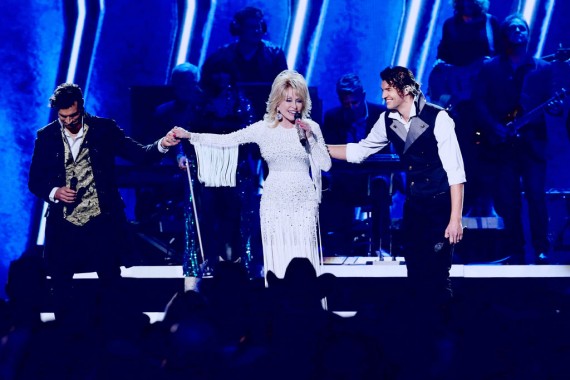 Dolly Parton has a very solid fanbase, and it was proven once more when a pint of Ohio-based Jeni's Splendid Ice Cream's new flavor dedicated to the singer quickly caused the firm's website to crash due to the traffic it triggered.

The ice cream is aptly named Strawberry Pretzel Pie to honor the singer's sweet personality. According to the company, the Queen of Country deserved an ice cream flavor dedicated to her because she was a massive inspiration to many.

In a statement posted on its website before the ice cream flavor was launched, the company said that Parton is someone many wanted to be when they grow up, and she has continuously been an unstoppable force for good in this world.

Her capacity to bring people together was also praised, much like what a good ice cream can do. According to Jeni's, the new flavor has "layers of salty pretzel streusel, subtly sweet and effortlessly tangy cream cheese ice cream and lipstick red strawberry sauce."

Because this ice cream flavor is dedicated to Dolly Parton, it is also meant to have social benefits. Proceeds of the flavor will go mainly to Dolly Parton's Imagination Library, a book gifting program that gives free books to children from infancy until they reach the age of 5.

On Thursday noon, the Strawberry Pretzel Pie was released, both in stores and online. It quickly sold like hotcakes since everyone knows it is a limited flavor.

Most also know from Jeni's Splendid Ice Cream's announcement that the flavor comes in limited quantities. Only 10,000 pints were made, and the company expects them to be all gone in a short while after going live.

The company was right, but not about selling out. Instead, it was right that people would love this Dolly Parton ice cream so much.

Because the people clamored to buy the ice cream flavor online, the whole website could not take the traffic and crash.

READ NEXT: 3 Ways Clean Wine is Better Than Conventional Wine

Typically, a website that crashes is annoying, but in this case, this is a huge compliment not just to the company but to Dolly Parton herself. Still, since the website crashed, it has become impossible to complete the purchases from fans.

This tweet further increased the hype, but people could not buy the product because the website has become dysfunctional.

The ice cream company later posted on Facebook explaining the flavor was not sold out, but its website was having issues. The shop quickly assured people that their team was working on getting the webpage back.

On Thursday evening, Jeni's Splendid Ice Creams has to make some damage control already. It went to its social media and wrote, "Thank you for TRYING to buy our Dolly pints today. We realize this release was disappointing and we're so sorry it's been a frustrating experience. Strawberry Pretzel Pie won't be back online today, but we'll give you 48-hour notice via social media and email before we re-release the flavor."

The company said the volume of demand surpassed its expectations by leaps and bounds. The company claimed its website witnessed 50 times more users than it sees on a normal day before Dolly Parton's ice cream went live.