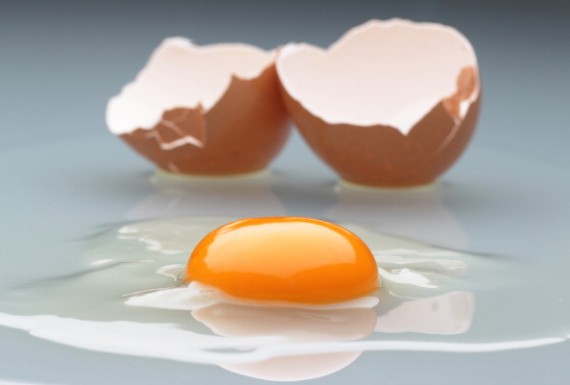 BERLIN, GERMANY - JANUARY 05: In this photo illustration an egg yolk and its shell are pictured on January 5, 2011 in Berlin, Germany. German authorities across the country are on high alert following the disclosure that the animal feeds company Harles and Jentsch GmbH sold large quantities of dioxin-tainted animal feed to poultry and hog farmers. Authorites in Lower Saxony have halted eggs and meats shipments from 1,000 farms as a precaution, and consumer groups have warned the public against eating eggs for the time being.
(Photo : Photo Illustration by Andreas Rentz/Getty Images)

Vegetarians are people who don't eat meat, fish or poultry. And it takes commitment, will power and dedication to live up to the veganism. Those who turn vegan need to give up a lot of types of food including eggs. And it's no easy task. To help vegans in cooking, here's a list of egg substitutes for the vegetarians:

Bustle said just replace an egg with a quarter cup of apple sauce in recipes. The dish will be moist and soft even without eggs.

According to Kitchn.com "egg substitutions depend on the type of recipe you are making". And to make chewy or baked goods, the egg can be replaced with mashed bananas. The ratio is one egg will be replaced by one mashed ripe banana.

Pumpkin puree can also serve as an egg substitute in baking. Livestrong said "trade 1/4 cup of pumpkin puree for each egg in the recipe".

One tablespoon of ground flaxseed with three tablespoons of water can replace an egg in a recipe. "Let the mixture hang out for a few minutes, allowing the seeds to soak up the H2O. Add the mixture to your batter as usual" said Bustle.

It's a very popular substitute in vegan baking websites such as VeganBaking.net. They said it contains protein, fiber and are an excellent source of omega-3 fatty acids. For egg replacement, grind the chia seed and add water, just like the flax seed.

Soy or coconut yogurt can replace the egg in your dishes. Depending on the flavor you choose, it can also add a hint of taste to dishes. But to be sure, you can always opt for the basic yogurt flavor.

This miracle ingredient can do wonders and it acts as an egg replacement, too. Mix a quarter cup chickpea flour with a quarter cup water or non-dairy milk. This formula is equivalent to one egg.

In baking ¼ cup of pureed tofu is equivalent to one egg.

For healthier bread or baking egg substitute, people can try to use avocado. Avocados are known substitutes for both eggs and butter when baking.