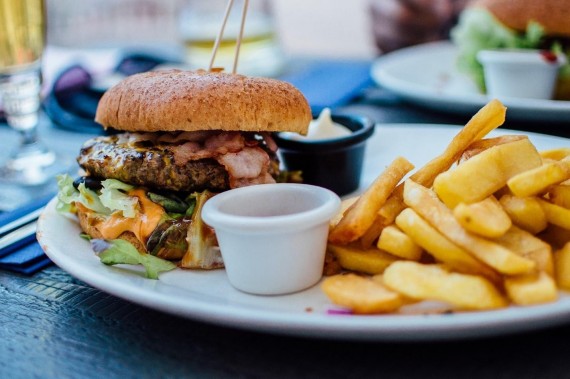 Eating Because of Taste

Many college students confess that they eat fast food because it's tasty. This confession is true enough. Every adult who has tasted some chips or hamburger would admit that it tastes nice. However, you should be strong of will to refuse constant consumption of this unhealthy food.

One study focused on the so-called Theory of Planned Behavior. It included 354 middle school students. As the scientists expected, schoolers consumed fast food mostly on some special events like celebrations and hanging out with friends. They followed a certain behavioral concept. They wanted to appear attractive in the eyes of their schoolmates and watched what they consumed.

The Influence of the Environment

A lot depends on the students' environment. Boys and girls tend to take care of the figure while they learn at school. After they begin to attend colleges and universities, the situation greatly changes.

Another research showed a significant increase in students who overweight or are obese after they graduate from school. Approximately 56% of students go to fast-food restaurants at least once per week and the rest 44% do that regularly.

Steadily, students become more addicted to junk products. Perhaps teenagers feel more freedom and their own figures don't bother them anymore. Besides, freshmen don't want to fall behind the rest and so, imitate the behavioral models of the senior students.

There are numerous restaurants of McDonald's, Burger King and KFC throughout the country. As they appear in the neighborhood of students, it becomes more difficult to withstand a desire to go there. Thus, the number of fast-food consumers begins to increase among college students.

Not Enough Knowledge about Calories

Many people mistakenly think that chicken sandwiches and burgers are fresh-out-of-the-fire products. It's not so! They are simply cooked with a special flavor, which is something like "natural flavor smoke". It gives the smell of the fresh-cooked meat, but it's a pure fake. In fact, fast food products are full of unnatural ingredients, which provide fake smell and taste.

Professional advertisers know how to sell their products. They appeal to the imagination of people via visionary effects. The advertisement campaigns of McDonald's and similar corporations use the same strategy. They use bright colors to attract the attention of people. University of Rochester scholars say that yellow and red colors stimulate our brain and activate our attention, appetite, and even the speed with which we consume meals. Besides, some appealing and smartly written advertisements also affect our brains. The colors draw our attention and words convince us to buy.

The size of the meal is important. According to statistics, customers of McDonald's prefer half-portion meals to the full-size portions. Commonly, these are meals for kids with some toys or monetary rewards. Why does it take place? A smaller size of the portion affects our brain, telling us that it contains fewer calories. Besides, toys and monetary rewards stimulate the brain areas answerable for reward, motivation, and desire. Students don't recognize that half-size portions with rewards have the same price as the full-size portions.

The final outcome of constant raids to fast-food restaurants in the development of a strong addiction among college students. They simply cannot refuse eating junk products and lead themselves to health ailments and deviations. However, any form of addiction is a psychological phenomenon. A strong power of will can change everything.

This is a huge matter of concern. College students ought to be very careful with what they consume and refuse fast food. Otherwise, they risk being obese and suffering from other severe ailments.

Grocery Prices Rise in US as Pandemic Disrupts Supply Chains

Diet: The Solution to Scalp Problems