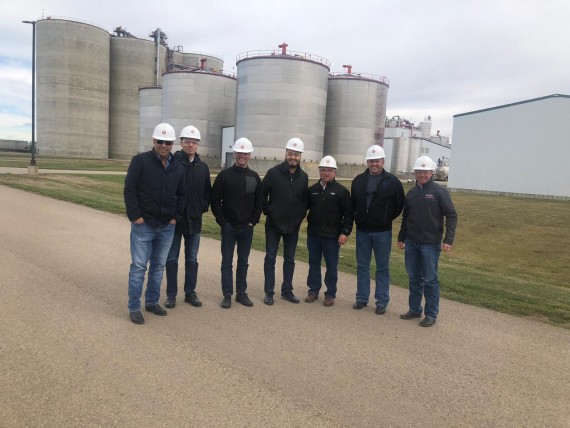 Sustained growth over the last decade has positioned Kazakhstan as a leader among the world's emerging economies. Singapore-based Kusto Group, a multi-sector international company founded by Yerkin Tatishev and a group of reform-minded Kazakh entrepreneurs, believes that investing in high value-added, export-based agriculture will establish the foundation of the country's agricultural revival.

The innovation and vision of Kusto Group is part of a greater initiative spearheaded by the Government of Kazakhstan aimed at fostering economic diversification and transforming the country's agriculture industry. This commitment to modernization and establishing an integrated protein strategy has caught the attention of global leaders in the agribusiness and food industry. According to Daniel Kunin, a Managing Director of Kusto Group, the investments of international industry leaders in partnership with Kusto Group represent a strong vote of confidence in the continued growth of the sector.

A recent Organization for Economic Cooperation and Development (OECD) report highlighted the continued efforts to elevate the industry standards across Kazakhstan's agricultural sector stating that, "diversification is a priority for long-term, inclusive, and sustainable growth in Kazakhstan."

Historically, the country's economy has primarily been based on the extraction of natural resources such as oil, mining, and natural gas. These exports currently account for two-thirds of Kazakh exports and half of government revenues.

However, as Tatishev points out, "These resources are finite and not sustainable so cannot be depended on for the long term. Such is the need to transition to a long-term and sustainable agriculture-based and renewable resource in order to diversify and grow the national economy."

While Kusto Group's Kunin is optimistic about Kazakhstan's agricultural future, he asserts that the transformation of a country's agriculture is a complex task that requires long-term commitment from the government and partners in the private sector. While changes will not occur overnight, Kazakhstan already has all the ingredients for developing a high value, export-based agricultural ecosystem.

Kazakhstan is the ninth largest country in the world by geographic area. Well suited with vast expanses of rich, fertile, arable land, Kazakhstan has an enviable geostrategic position for export to Russia, China and countries in the Middle East.

The potential exists to become a major meat provider to Europe. Leadership from the Kusto Group and its international partners is a cornerstone for the transformation of the agricultural sector. Cooperation from policymakers and other business leaders will also be critical in establishing long-term growth for Kazakhstan's agro-business economy.

When it comes to growth and environmental impact, sustainability is critical for the economy and the future of Kazakhstan. Innovation with a clear purpose is required. In order to produce new export goods and services, a holistic view with vertical integration is key.

Kusto Group's modus operandi is to introduce innovative technology and best practices at every step of the way; from pasture to packaging. The company was the first to import world-class breeding stock and genetics with Angus and Hereford cattle brought from the United States. Local seed production and modern infrastructure such as precision irrigation systems are other critical pieces for the transformation of agriculture in Kazakhstan.

Front row from left to right: Yerkin Tatishev, Chairman of Kusto Group, Askar Mamin, Prime Minister of the Republic of Kazakhstan, and Steve Stouffer, group president of Tyson Fresh Meats, sign an agreement to collaborate on a project that includes the construction of a meat processing facility in Kazakhstan. 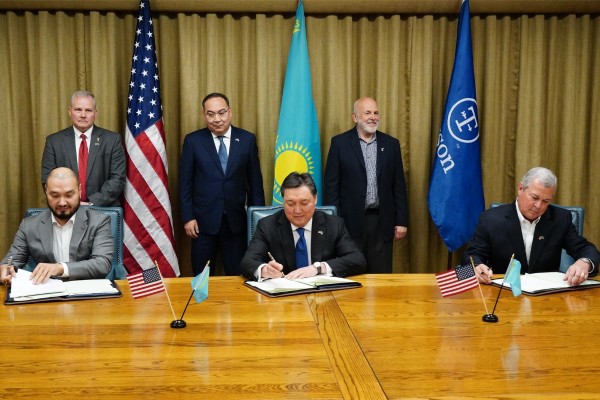 Front row from left to right: Yerkin Tatishev, Chairman of Kusto Group, Askar Mamin, Prime Minister of the Republic of Kazakhstan, and Steve Stouffer, group president of Tyson Fresh Meats, sign an agreement to collaborate on a project that includes the construction of a meat processing facility in Kazakhstan.

The Kusto Group believes in the value of partnerships as a means of sharing best practices across the industry. The past year has led to several joint ventures between the Kusto Group and various industry-leading firms in the United States. The goal of these partnerships is to come local knowledge and expertise with state-of-the-art farming practices and agricultural technology from industry specialists.

Kusto Group has signed a historic deal with Tyson Fresh Foods, a division of American food production giant Tyson Foods, and the Government of Kazakhstan that will begin with the construction of a new meat processing facility in Kazakhstan. The private-public partnership represents the largest projected economic benefit of any deal since the country secured its independence.

Kazakhstan has poor infrastructure for agricultural industry. Currently, only a meager seven percent of arable land is properly irrigated. Kusto Group's partnership with Omaha-based Valmont Industries will bring a new facility for in-country production of modern precision irrigation equipment that will undoubtedly reshape farmland across the county.

Yields will increase, water will be saved, and a new level of food security will be ensured, stabilizing farmer activity. Lower-income rural communities will benefit from job and income growth, as many of the proposed infrastructure manufacturing sites are based in those communities.

The partnerships so far have been important for the infrastructure growth and development across the country. A joint venture with Minnesota-based Baumgartner Agricultural Science and Service (BASS) is bringing world-class non-GMO seed production techniques to Kazakhstan so the region's livestock will have healthy, sustainable, and nutritious grain in volumes that can support the entire agro-economy.

Kusto Group has invested in the future of Kazakhstan's agricultural growth and economy from the bottom up. According to Tatishev, these 'nuts and bolts' plans being developed and in the works will help over the long term in the agri-sector and will identify Kazakhstan as an emerging leader towards greater economic diversification and broad-based wealth creation.

Independent international economic organizations such as the World Bank and Moody's Investor Service have recently upgraded Kazakhstan's economic ratings, supporting continued efforts by the government and businesses like Kusto Group. Kazakhstan, with commitment from the government and investments from companies like Kusto Group and its international partners, is prepared to confront the challenges of sustainable growth in the agricultural economy of the region.