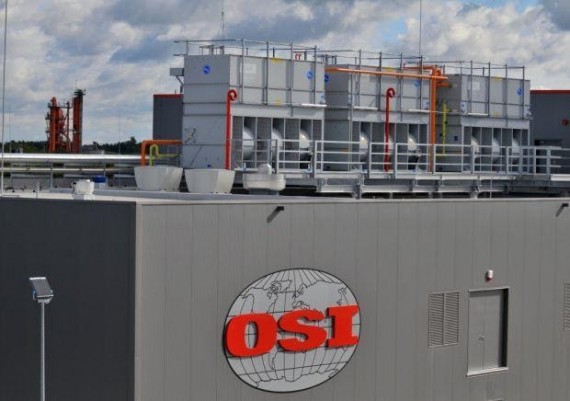 OSI Group began as a small, family-owned business established by German immigrant Otto Kolschowsky. He arrived in the burgeoning German immigrant community in Chicago, Illinois, at the turn of the 20th century and found an opportunity to open a small meat market and butcher shop to serve consumers and businesses in the region.

After more than a century of evolution and innovation, OSI has more than 65 facilities in 17 countries and employs more than 20,000 people globally. From the beginning, OSI's biggest strength has been its unwavering commitment to providing superior food products and excellent customer service.

Sheldon Lavin, who assumed the role of chairman and CEO of the company in the early 1980s, said in a recent interview that the company culture nurtures the natural entrepreneurial spirit in its employees' DNA. He went on to explain why he thinks the company will continue to enjoy growth and prosperity for many generations.

"The people who work with us and the quality of our products will always come first," said Lavin. "That's why we're considered number one by the best leaders in the business. Every day is a new day to prove it."

A look back at the major events and milestones of 2019 illustrates the many reasons that OSI has a stellar reputation in the food supply chain industry and continues to set high benchmarks for industry leaders worldwide.

OSI Food Solutions UK achieved a five-star audit rating from the British Safety Council for the period between August 2018 and July 2019, claiming recognition for workplace health and safety excellence. Maintaining maximum health and safety is a stellar accomplishment, as only 84 companies worldwide received this coveted award.

When receiving the award for the fifth time since 1988, Ian Hurley, OSI's safety, security and environmental manager, confirmed that OSI remains strongly committed to the staff and sustainability protocol, saying, "We highly value our workforce and work diligently to ensure our workers and workplaces are safe."

OSI Group acquired Creative Foods in 2016 because the two companies shared a common vision and passion for entrepreneurship, innovation, value, food safety and security, and a pursuit of excellence.

Because giving back to the community and encouraging others to pursue excellence comes with achieving best-in-class recognition, OSI sponsored the Supplier Quality Summit this past summer.

The theme was "Winning Together: Achieving Superior Supply Chain Quality," and the event highlighted the importance of collaboration to achieve superior food quality. The speakers stressed the importance of safety and efficiency in the food industry to nourish and enrich people's lives and the communities they serve. Other messages focused on animal welfare, workforce diversity, developing a food safety culture, and following best practices to encourage innovation and creative applications that bring new products and services to the marketplace.

As a global leader in the food supply chain, OSI specializes in the sourcing, development, processing, packaging, and distribution of protein foods. OSI has a long history of producing hamburger patties for restaurants and food service outlets. The company was one of the first suppliers to the original McDonald's opened by Ray Kroc in 1955 as a franchise agent for the California couple who founded the restaurant chain in 1940.

Today, restaurants depend on OSI for many items, including beef and sausage patties in various sizes and flavors.  Now that plant-based cuisine is expanding and gaining acceptance in the marketplace, there are new opportunities for food manufacturers and retailers to expand their offerings to include such items.

Impossible Foods had success with development of its protein patty that tastes very much like beef, and in 2019, announced co-manufacturing agreement with OSI to begin producing the ImpossibleTM Burger. This meatless burger is currently available at select food outlets, including Applebee's, Cheesecake Factory, Burger King, Red Robin, White Castle, and some pizzeria locations across the United States.

The list of companies adding the ImpossibleTM Burger to their menus continues to expand, and OSI is prepared to increase production going forward to meet regional and global demand. Based on current growth patterns, the ImpossibleTM Burger was expected to be in 17,000 restaurants by the end of 2019. With the popularity of high-protein plant-based alternatives growing, some industry experts are looking ahead to a future in which eggless eggs will become as normal as eggs produced on a chicken farm.

Kevin Scott, senior executive vice president of OSI North America, explained that this new venture perfectly complements existing practices because the company has always offered high-quality, alternative protein solutions. "We are a customer-centric company," says Scott, "and our mission is to supply our customers with world-leading protein products, working together to produce the best proteins for each market."

OSI announced that it had joined the University of Wisconsin's Food Research Institute as a supporting member in April 2019. This support is part of an ongoing desire to enhance food safety with industry partners.

This past year was full of exciting new opportunities and expansion. In April, OSI announced the acquisition of the Rose Packing Company Inc., a well-established, highly respected meat processing company that supplies retail and food service customers.

Rose had been operating as a fifth-generation, family-owned organization with a full-scale production facility in Chicago with more than 700 workers. OSI and Rose shared common values and a strong commitment to provide innovative solutions to customers backed by superior customer service, making this a great fit for both companies.

This acquisition strengthens OSI with enhanced capacity and a strong sales presence in preferred channels. The business marriage of these two industry leaders is expected to produce significant growth potential for OSI and its partners.

The Sustainability and Environment prize is given in recognition of an organization's "exemplary contributions to a more sustainable meat value chain." OSI Spain received the prestigious award for its commitment to following an internal sustainability contract implemented in 2014 in all OSI Group European plants. The policy established specific measurable goals in a number of sustainability areas, including energy efficiency, water consumption, waste management, staff training and development, supplier auditing, safety and health, and other key objectives.

The year 2019 offered ample opportunities for company employees to move up the ladder and grow professionally. Many were invited to give speeches, lead workshops, and educate consumers and industry peers on emerging trends and research findings. Though there were too many to mention, here are some of the most notable employee news events of the past year.

OSI Group's company leadership is often recognized by other businesses in the food supply industry, and many are elected or invited to assume positions on agency boards and committees. 2019 was a year of professional growth for individuals in the OSI family.

Nicole Johnson-Hoffman, senior VP and chief sustainability officer of OSI Group, was reelected for a second term as president of the Global Roundtable for Sustainable Beef (GRSB) in February.

In other employee news, Mark Richardson, senior VP for OSI Group's Global Supply Chain, was invited to join the International Programs Advisory Committee for the College of Agricultural, Consumer, and Environmental Sciences at the University of Illinois. This committee works to improve teaching, public engagement, and research through international activities and sets priorities for the college's outreach and partnership development.

For Susi Shifflette, QA technical manager for OSI Europe Foodworks, her work is all about proper animal welfare practices. She is passionate about fostering responsible care of animals raised for food. She is an active member of the German Meat Industry Association, and she previously spoke at the International Society for Animal Hygiene functions. She was a key speaker during the Annual Animal Welfare Meeting on October 2, 2019. She has also been asked to speak at the Bangkok ISAH Congress in 2021 on OSI's progress in animal welfare programs.

Shifflette started her career with OSI stateside in Aurora, Illinois, but moved to Europe to "empower the entire OSI supply chain and the industry as a whole" with one focus: the animals. Fortunately for the animals and the workers in the industry, OSI has a company culture that fuels personal growth and encourages talent to pursue their passions.

Giving Back to the Community

Feeding one's passion is not limited to work-related activities. OSI Group corporate employees started this year focused on helping solve food insecurity in the United States. A group of employees joined Mooseheart Charities in delivering post-holiday stockings to middle school students in Batavia, Illinois, on January 11, 2019. It was a rewarding way to ring in the New Year with purpose and passion.

The local West Chicago OSI facility sponsored an Agriculture Food of America (AFA) tour for area students in February. These events put a local face to the industry and introduce students to future careers and organizations that support sustainability and animal welfare initiatives.

In April, the OSI Outreach Team gathered to pack 500 backpacks with food items for children in need. Participating in the Blessings in a Backpack! program was an opportunity to serve elementary-aged children who may face food scarcity on weekends when school is not in session.

OSI has developed regional partnerships around the world in Brazil, Thailand, China, Spain, Germany, Canada, and the United Kingdom. These relationships up and down the food chain allow the company to shape the industry while empowering consumers with the information they need to make sophisticated decisions about their food consumption choices.

It is important for industry leaders to get out of their offices and into the field, where they can collaborate with peers and colleagues facing diverse challenges. Volunteer activities allow OSI workers to check the pulse of local communities and discover knowledge gaps and emerging needs ripe for innovative solutions.

Whether executives and front-line workers connect and interact with local leaders and customers or travel halfway around the world to attend a conference on animal welfare, it is essential to remember those early days when the company visionary made the bold decision to immigrate to the United States and open a small neighborhood meat market. That passion for excellence and community service lives on today. The company culture is one built on a rich history of taking chances to make things better for the ever-changing customer base.

Integrating the most advanced technology in food safety and equipment and continuously examining research and development outcomes are core responsibilities that drive OSI growth strategies. The company shares positive and negative findings with partners and competitors throughout the food supply chain because it believes that a healthy food supply is essential for everyone.

The year 2019 was filled with amazing growth, numerous awards, and myriad opportunities to strengthen communities that have welcomed OSI with open arms. Going forward, expect to see the company continue to monitor its sustainability performance and look for innovative solutions for meat, poultry, and plant-based protein products for commercial and retail consumers.