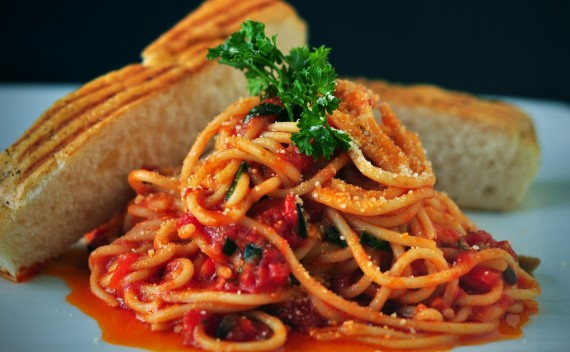 It is estimated that there are more than 350 types of pasta in the world, and many more ways to prepare pasta. You will find elbow macaroni, corkscrew pasta, spaghetti noodles, fettuccine, linguine, and many others. No one is sure who created the first pasta, but Marco Polo describes eating pasta in China in 1271. Since Italian cuisine is primarily known for its creative use of pasta, consider dining on scamorza ravioli with saffron potato cream sauce and courgettes at Buca San Giovanni Florence, Italy. This restaurant has been serving delicious food since 1882 in a building that was initially constructed in the 1300s as a church.

Researchers believe that there are more than 40,000 varieties of rice in the world today, but the seed from more than 127,000 rice varieties are stored at the International Rice Gene Bank in Los Baños, Laguna, Philippines. More than 50 % of the world relies on rice as a staple in their diet every day. Archeologists believe that they have found the oldest cultivated rice at Shangshan, China, and it is approximately 9,400 years old. If you want to eat terrific tasting rice, consider heading to India, where people consume over 100 million metric tons of rice annually. If you are looking for a great place to eat rice in India, head to Allen's Kitchen, Kolkata, India, but you will want to consider this restaurant for a healthy late-night snack as they are only open in the evenings.

While Americans eat about 350 slices of pizza per second, residents of Norway consume more pizza per capita. On average, the average Norwegian consumes 11 pounds of pizza annually. Legend records that pizza was first invented in Italy, where it was only served to royalty on very special occasions. Treat someone special to an outstanding pizza meal by going to Antica Pizzeria Port'Alba in Naples, Italy, which is commonly assumed to be the oldest pizzeria in the world. When it was first opened in 1738, vendors would fix their pizzas there before cooking them in tin ovens that they would carry on their heads as they pedaled the pizza on the city's streets.

The first domesticated chickens were raised for cockfighting, and they were not eaten. Archeologists believe that the first chickens to be raised as food were raised in Israel about 400 B.C. Today, more than 450 varieties of chickens are recognized by the American Poultry Association. In order to dine on the best chicken dinner, consider heading to Ma Yuxing in Kaifeng, Henan, China. This restaurant was initially established in 1153, and it is commonly assumed to be the oldest continuously operating restaurant in the world.

There are many common foods consumed across the world. Put these restaurants on your travel itinerary for great iconic meals. You will not be disappointed.