What Fast Food Chains are the Most Popular in the World?

The current global pandemic has made it impossible for people to lead normal lives, with most of us having to stay indoors until it is safe to go outside. This approach works to ensure that the viral disease doesn't spread so that it is much easier to control it. As a result, supermarkets and shopping delivery establishments have had to deal with an almost sudden increase in demand that has surpassed the norm. People are now preferring having their meals delivered as takeaway services making orders from within their residences.

The information from this article reveals what the majority of the worldwide population prefers when it comes to food and deliveries. Data disclosed by the google keyword planner shows that as the pandemic tightens its grip and restrictions being put in place, customers are now turning to online searches with words and phrases turning up as the most searched terms on the internet. Such sentences and words include "takeaway," 'takeout,' 'food delivery,' and 'delivery.' Between May and march, the volume of these keywords rose by almost 300 percent.

For fast food orders, McDonald's has registered the most searches in the realm of branded fast-food chains. This data was from a survey that aimed to target information collected from 81 countries spread out across different parts of the world. The fast-food giant commands the largest share in the global market in revenue from the information released in 2018. McDonald's now has 37,855 stores in over 100 countries in the world. Out of the selected 91 countries under analysis, 41 of them ranked McDonald's as the top branded takeout food establishment according to the data retrieved from the online survey. 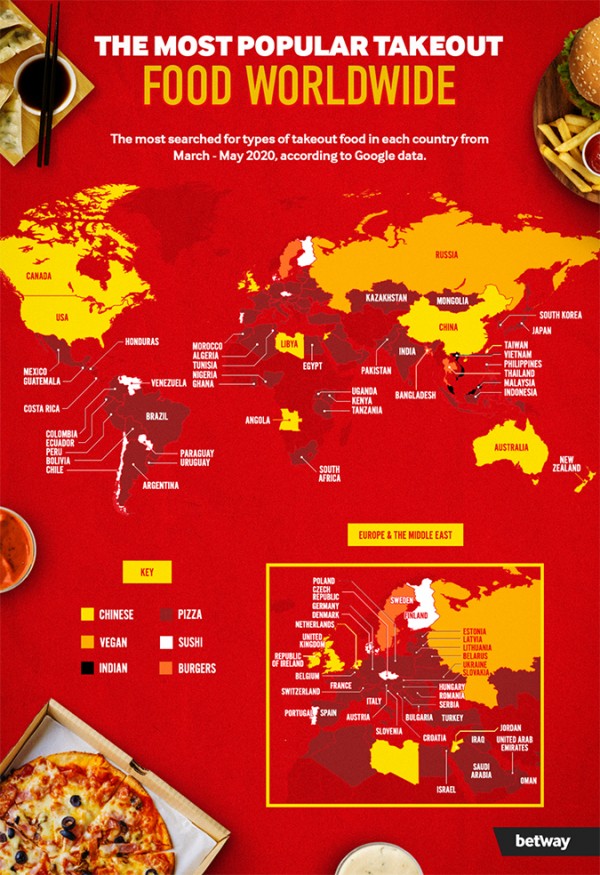 Much of the popularity of this fast-food giant was garnered from searches in Europe. Out of 30 countries under the review, 26 were very much Big Mac enthusiasts. KFC took up second place as the most popular fast-food restaurant chain, with 23 states having it as a top search preference. Among these nations were South Africa, Australia, and the United Kingdom. However, KFC was noted to have massive popularity in Malaysia due to its top-quality array of products that continued to make its mark on the global food market structure.

In a single month, Malaysia could record an average search count of 301,000, making it the top country in this category. According to reliable sources, KFC is responsible for accommodating orders from over 25 million customers in Malaysia alone. The entire population in the country tallies up to only 6.5 million more than this figure. KFC has a customized menu for people in this region, such as the rice congee, a different kind of porridge as well as Teh Tarik, a type of milk tea that is very popular with consumers in South East Asia.

From the survey, the company with the highest popularity based in a single particular location was Pizza Hut from the United States. Between March and May this year, Pizza Hut had searches that averaged to about 1.83 million every month.

The Sirtfood Diet: Facts and How To's