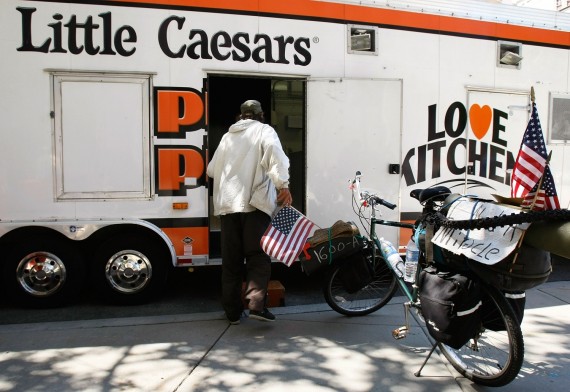 Based on a study conducted by the HealthyBeat website, the pizza restaurant, hailed for its $5 pies, can take home the crown of "America's healthiest fast-food restaurant."

Pizza places do not necessarily have a good rep for having healthy food items, so this result might be a little shocking. But the process of ranking renders the result quite valid enough.

Those in the top five apart from Little Caesars just might be as surprising. In the close second is Starbucks, followed by Dairy Queen. McDonald's is actually on the fourth spot, and Subway is on the 5th.

It is important to note, of course, that this does not mean it is already healthy to eat at these five restaurants regularly. The calorie and fat content of their foods are still likely to be very high compared to home-cooked meals or meals from other types of dining establishments.

HealthyBeat Nutrition Editor Crystal Marcano commented on why this study is timely and insightful.

"For a lot of people we know that fast-food has become a big part of their weekly diet not just because it's nice, but because it is also extremely convenient," Marcano said.

Marcano even said he was personally surprised to see McDonald's even on the top five and also healthier than Subway.

"For me the biggest surprise was to see McDonalds in the top five, and healthier than Subway! Most people I think would agree that Subway seems the healthier choice, however McDonalds obviously has some lower calorie choices than you'd think!," he said about the results.

McDonald's and Subway are two of the largest international fast food chains in the world. The results are surprising given that past health studies have shown that between the two, Subway has more menu choices that are healthier.

On the other hand, because Health Beat only arrived at its conclusions based on calorie content and not anything else, then the ranking should still be looked at with a grain of salt.