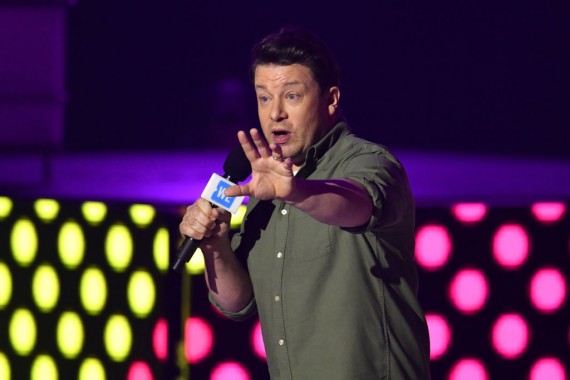 If there is one word that can be used to describe the kind of chef Jamie Oliver is, it would be "brave." But grapes on pizza?

Grapes on Pizza: Did Jamie Oliver Make a Mistake?

He would not have reached his celebrated chef status if he always plays it safe and does not dare to experiment with what he is serving.

So far, his portfolio of scrumptious dishes cemented his status as a well-loved chef around the world. But innovating comes with risks, too.

Sometimes, people may not necessarily like the outcome of certain experiments. It appears Oliver has now experienced what this means because his latest experiment - putting grapes on pizza, is not properly received.

The chef took to Twitter to post a video of him making this widely-known and loved food for a lunch with his family in his house. While the name "Speedy Sausage Pizza" is intriguing, his masterpiece raised some eyebrows because it had grapes as toppings. Fruit pizzas are usually not taken properly by all, and this is no different.

People around the world are still widely debating on the Hawaiian pizza - or having pineapples on pizza, but Oliver has paid this no mind when he posted a video of making this italian dish with another fruit - grapes.

The video first shows Oliver preparing the dough and setting it aside for proving.  He then added some sausages in the pan and fries them until they become golden in color. He then added rosemary leaves, onions with some oil and mixes them all together. So far so good.

Once the pizza dough is ready, he then added the usual tomato paste with the sausages on top. It would have been perfect in the eyes of many when he cooked this in the oven until its ready. He could have added some cheese and just placed it in the oven. The outcome would have been undoubtedly good already.

However, before opening the oven, he took the time to place one more garnish on top of his creation, which are the purple grapes.  This certainly got some people cringing. He then insists on his Twitter caption for the video that this recipe is certainly worth a try, which got a ton of comments disagreeing to what he said.

One user insists that there is no place in a pizza for grapes. "The only grapes that should go with pizza are in red wine," the offended user wrote. Some brought up the fact that this is as weird as having pineapples on pizza.

Some tried to defend the chef and the pizza in question, but many got harsh in their comments about the necessity of the purple fruit being added to the dish. After some time (or after probably reading the comments himself), he posted a poll on Twitter asking his fans if they find the grapes on pizza acceptable. The result was very telling, since as high as 65.4% said no.