Taco Bell is not done yet. After announcing the Crunchwrap Supreme, which had some avid fans jumping up and down, the famous chain now said it's bringing one of the fans' favorites - the Quesalupa.

The last time Taco Bell fans were able to sink their mouth into a Quesalupa was still in 2016. It was released as a limited-time offering then, and the reception was quite wild. It was considered one of Taco Bell's most popular limited-time offerings over, so it makes sense to bring it back.

The first time Taco Bell announced it would be bringing it back the Quesalupa was last year. At that time, the company tested possible reception by releasing it in Knoxville, TN only. The results were probably good because it is now officially back and available in all Taco Bell restaurants nationwide. 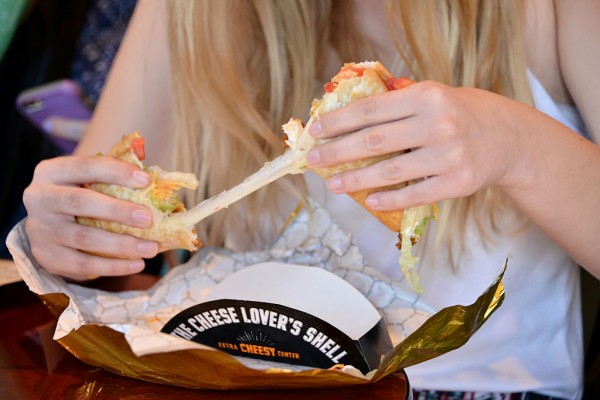 "Our customers raved about the cheese filled Chalupa shell in its first debut, so when the Quesalupa began its return journey back to our nationwide menus, we knew we needed to perfect that cheesy experience - one that will be consistent for every guest and every bite," Liz Matthews, Taco Bell's global chief food innovation officer, said in a news release Wednesday.

For those who have not tried a Quesalupa yet, they will certainly be in for a mouthful of goodness. The dream dish is made with a chalupa shell stuffed with a mix of melted pepper jack and lots and lots of mozzarella cheese. If that does not sound yummy enough, the food chain announced that the comeback would feature 50% more cheese. That's literal cheese heaven right there.

Quesalupa is Beyond Good, Fans Say

Apart from black pepper and cheese, the shell is then stuffed with all the fixings Taco Bell fans love, such as the seasoned beef, lettuce, shredded cheddar cheese, diced tomatoes, and reduced-fat sour cream. Those who have had the chance to taste it in the past already said it's beyond good. Some say it tastes like the Grilled Cheese Burrito but better because of all the cheese in it.

Since March 10, Taco Bell Rewards Beta members can already try it. The official launching today is March 11, and the official price is $2.99. Interestingly, the price did not change because it was priced the same when it debuted in 2016.

(Photo : Randy Shropshire/Getty Images for Taco Bell)
Musician Colin Dieden of The Mowgli's tries his first Quesalupa before surprising fans at Taco Bell's pre-order pick-up of what could be its biggest food creation yet on February 6, 2016 in San Francisco, California. (

Given all the inflation that has taken place since then, this is a good deal. Add a few more and you can avail this cheesy goodness for $6.99 in a combo meal with two Crunchy Tacos and a large fountain drink.

Fun fact: note that Taco Bell actually spent $5 million in 2016 just to introduce the quesalupa. The company paid the hefty amount for a 30-second commercial during Super Bowl 50 at the time, just so every American would know what exactly a quesalupa is. The money probably paid off though, because many raved about the dish then.

READ MORE: 3 Benefits to Eating Raisins You Might Not Know About