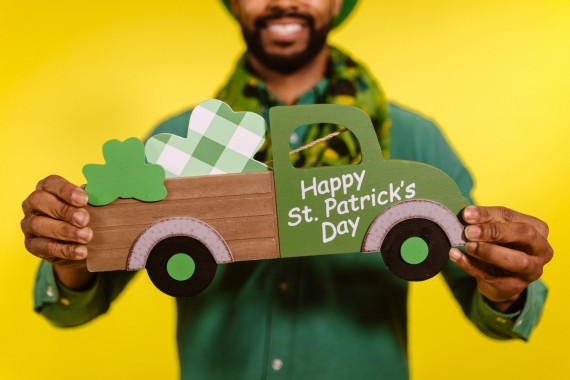 Krispy Kreme is known for donuts that look too good to just eat, and its newest offering is no exception. With St. Patrick's Day approaching, the donut company released a new collection that just looks too cute (and green) not to appreciate first, before gobbling them right up.

Now that we are halfway March of 2021 (because time just flies without chill), St. Patrick's Day is already around the corner.

This means, apart from celebrating the day, we can get to see the different new offerings and treats of establishments wanting to celebrate the special day as well. Krispy Kreme certainly prepared for this holiday.

The well-loved doughnut company just unveiled its St. Patrick's Day donuts for this year and "they look so on point they look so much better than a pot of gold," as described by Delish.

For this March holiday, Krispy Kreme prepared the Luck O' the Doughnuts Collection. This collection has a total of four new doughnuts inspired by the holiday, the first one of which is aptly called the Lucky Gold Coin Doughnut.

It's the Original Glazed doughnut we all love, but prettier and so much tastier because it's dipped in white icing, decorated with a green icing swirl, and then sprinkled with a heap of lucky gold coins/discs. This looks like the lucky donut we all need this year.

The second doughnut that is part of this green collection is the Lucky Sprinkles Doughnut. Again, it's an Original Glazed doughnut but this time, it's dipped in green icing and topped with a festive blend of shamrock sprinkle. ​

The third flavor looks the cutest, and the hardest to eat. Called the Lucky Unicorn Doughnut, it is also an Original Glazed doughnut but unlike the first two, it is filled with Kreme. It is also dipped in white icing and hand-decorated to take on the appearance of a magical unicorn. No pink and pastel colors in this unicorn, but no problem. It still looks like what a mythical creature should look like in a doughnut.

The last one, though, is the smartest looking doughnut. Called the Lucky Leprechaun Doughnut, it's filled with Cookies and Kreme, and then dipped in green icing. Krispy Kreme decorated it with plaid icing stripes, and topped with a Leprechaun Hat sugar piece, and it is simply divine-looking

All of these donuts are now available. It officially launched on March 11, at participating shops nationwide. According to the Thrilist, all these four doughnuts look like they came straight from a fairytale. If you are looking for a reason to check them out, this description is already it.

Apart from these four flavors, Krispy Kreme is also set to bring back its greenest doughnut.

On March 16 and 17, Krispy Kreme will be bringing back its well-loved green O'riginal Glazed Doughnut. It's the brand's original glazed doughnut but BRIGHT GREEN both inside and out.

The company also announced that those who would head to the shop's counter or drive-thru wearing green on St. Patrick's Day, can get one of these green monsters for free.

READ MORE: Here are 5 Best Veggie Burgers in PH, According to PETA