Demi Lovato Reveals This Fast Food Is Her Go-To, Despite Being 'Shamed' 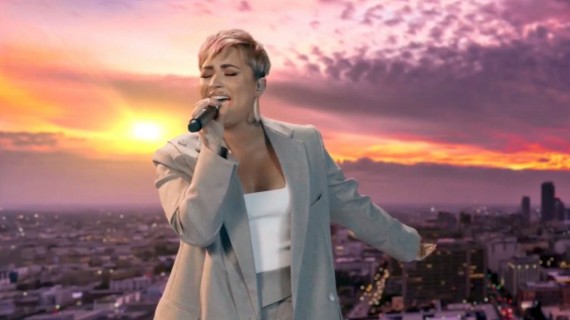 Demi Lovato can eat anywhere in the world, but the singer-actress is standing by one fast food chain. it's her go-to, despite once being shamed when she was caught eating there.

Demi Lovato Loves Taco Bell Through and Through

In a new interview with Glamour, Demi Lovato shared what her favorite fast-food chain is, and revealed that she no longer eats there with guilt. Instead, she is all for observing a healthy moderation.

What is the lucky fast food chain? It's none other than Taco Bell, which she already raved about in the past.

"I love it," she tells the magazine. Those who were her fans over a decade ago would know that she once sung praises for the Tex Mex chain already.

In 2009, Demi Lovato took to her social media account and wrote, "I literally almost cried tears of joy over Taco Bell," as reported by Eat This!

While she no longer eats in Taco Bell with shame, she did not have an easy time reaching this stage. She can distinctively remember being shamed for eating at Taco Bell alone when she was younger, which created a host of esteem issues on a impressionable girl like her in the past.

Speaking with Glamour, Lovato says she was filled with "fast-food shame" when people got a lot of things to say about her eating alone at a Taco Bell in 2017. It was a bad time overall, because she was in the middle of intense pressure from her handlers at the time.

Today, with a healthier outlook about foods and health, and with a new management team in tow, she shares her penchant for her favorite fast-foods has returned. She is also now on the way to recovering from her eating disorder recovery.

"I am now making choices-for the day, and then the future-about what it is I want and what's going to make me the happiest," Lovato said.

For Demi Lovato to love Taco Bell so much is not surprising, though. The fast food chain has been one of America's favorites for years now. It must have something to do with not just its delicious tacos, but its apparent commitment to offer something satisfactory all the time.

Based on the latest news about the fast food chain, the company is presently testing out different exciting $1 burritos so that not only can more people enjoy their food, they can afford it, too.

It was reported that spicy tacos are one of the new menus being tested out, which would be loaded with seasoned beef, lettuce, cheddar cheese, and the customer's choice of one of the bold, spicy sauces Taco Bell has come up with.

Not only that, the company is also testing some stacked bowls in certain state, which many are praying would become nationwide offerings soon. One of these stacked bowls is called the grilled cheese stacker, and by the name alone, it is apparent that it will be a flour tortilla loaded with seasoned beef all sorts of cheese.

READ MORE: Hawker Chan: This is Where Your $2.25 Can Get You a Michelin-Starred Meal