How To Have Abs: Top 3 Foods to Eat to Get a Six-Pack

TAG:foods for abs, how to have abs, Six Pack 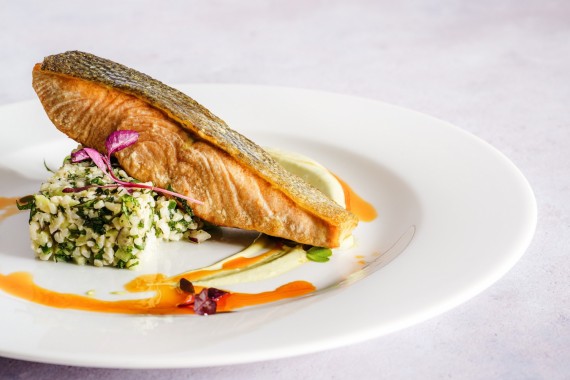 Salmon can help with your abs goals.
(Photo : Photo by Sebastian Coman Photography from Pexels)

Gaining some abs is not easy, but it's not impossible either.

The Right Kind of Carbohydrates

Wishing to have abs had you skipping the rice? Avoiding all the carbs? You are not going to get abs that way. Carbohydrates are so necessary for the objective of having abs because they fuel your energy, which you would need to do the different rigorous targeted exercises for abs.

While it is probably a good idea to skip white rice and pasta for a while, to avoid eating carbs will work against you and make your dream abs impossible to achieve.

The right kind of carbs are most of the unrefined grains, such as whole wheat bread, brown rice, and oats, according to Medical News Today. You can also add some fruits and non-starchy vegetables, such as cauliflower, spinach, and broccoli. Beans and legumes can speed up the process too, such as lentils, kidney beans as well as chickpeas. If you want some starchy vegetables though, stick with sweet potatoes and corn.

ALSO READ: Demi Lovato Reveals This Fast Food Is Her Go-To, Despite Being 'Shamed'

The Right Kind of Protein

Not all protein can lead to abs. Essentially though, the wrong kind of proteins are those you ended up frying. Fried foods can work against you in achieving defined abs.

For faster and more effective abs, eat poultry, including chicken and turkey, roasted or steamed. Have some meats, but lean not fatty. Choose fatty fish, such as salmon and sardines, since they packed with Omega-3 fatty acids.

According to Bro Bible, consuming salmon 2-3 times a week can even remove the take fish oil supplements completely, because this dish is that loaded with the essential fatty acids.

In relation to this, indulge in some low-fat dairy products such as low-fat milk, cheese, and plain yogurt.

Some seeds, including pumpkin, sunflower, and quinoa, can also hasten the process of getting abs.

Drinking is as needed as eating (and exercising) when you want abs. But drinking alcohol is not a good idea. That would immediately give you a beer belly - the exact opposite of abs. And since you need to avoid sugary stuff for abs, the juices are out of question too.

Instead, what you should drink a lot of, is good ol' water. Water is life, and water is abs.

Water is critical when exercising, because dehydration can affect exercise ability. Certain drinks can be dehydrating than hydrating, regardless if they are in liquid form, so avoid those (ahem, coffee). Water can also help reduce bloating in the abdominal area because it can lead to effective waste removal from the body.

Why Do People Faint and How Is It Prevented?