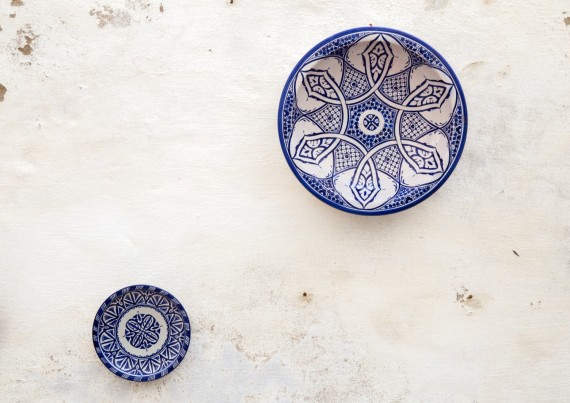 A 15th century porcelain bowl, similar to these, was found in a yard sale in Connecticut.
(Photo : Karim MANJRA/Unsplash)

An extremely rare porcelain bowl was discovered by an antique enthusiast at a yard sale in the New Haven area. While this person thought it was a special find, "special" turned out to be an understatement.

Sotheby's, one of the world's biggest auction houses, confirmed that the bowl dated back to the Ming Dynasty in the 15th century. According to specialists, the bowl's intricate floral design in white and blue are a trademark of that period.

The Washington Post reports that the head of Sotheby's Chinese Works of Art Department, Angela McAteer, said that it's a "once in a lifetime discovery" that Chinese art specialists can only dream of. McAteer added that there are only six other bowls currently known to exist, and those can be found in museums around the world. Sotheby's confirms that there are two such bowls in London; one can be found at the British Museum and the other at the Victoria & Albert Museum. Two are in the National Palace Museum in Taipei, Taiwan, and one is in the National Museum of Iran. This recent find is the sixth bowl and the only one in the United States.

While it's a "frustrating mystery" as to how this rare artifact ended up in Connecticut, McAteer surmises that it may have been passed down from generation to generation. Obviously, they may not have known the true value of it since it ended up in a yard sale.

ALSO READ: Drunken Cheese and Other Unusual Cheeses To Try Before You Die

While the buyer's name hasn't been released, he bought the bowl for a mere $35. He then emailed Sotheby's for an evaluation, and they sent specialists to examine the bowl in person. To say it was a steal is the understatement of centuries. Sotheby's estimate of the bowl's value at between $300,000 to $500,000.

CNN reveals that the "lotus bowl" was auctioned as a part of Sotheby's "Asia Week," a series of sales featuring contemporary art, antiques, and artifacts from Asia. On Wednesday, the artifact earned 15 bids. The official purchase price declared was $721,000. The name of the final buyer was not disclosed.

At this time, no scientific tests were performed. The bowl was examined by specialists and declared authentic based on the excellent and unmatched porcelain work from the Yongle Period in the early 1400s. The design on the outside features four blossoms of lotus, peony, chrysanthemum, and pomegranate flower. On the inside, there's a medallion a quatrefoil motif surrounded by a floral design. Intricate patterns adorn the inside and outside borders. It's called a "lotus bowl," as the shape resembles a lotus.

McAteer, in a press statement, says that this rare find is just a reminder that there may be "precious works of art remain hidden in plain sight just waiting to be found." The next time you encounter a yard sale, keep your eyes wide open.

READ MORE: 5 Oldest Food Brands Around the World That Are Still Popular Today