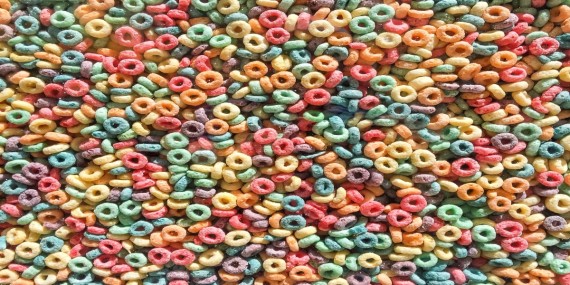 Aside from sugar content, watch out for artificial coloring in cereals.
(Photo : Etienne Girardet/Unsplash)

Cereal is a staple in most pantries. According to Serious Eats, it's even considered the quintessential American breakfast. It's cheap, quick, and the easiest thing for even young kids to prepare. Cereal lovers also point out that you can eat it at any time of the day. However, a lot of cereals are also laden with sugar. The worst cereals have the recommended amount of daily sugar intake covered with just one serving.

For your reference, the American Heart Association recommends only 25 grams or six teaspoons of sugar for women and 36 grams or 9 teaspoons for men. With that in mind, here are the top nine worst cereals you can buy, as compiled by Eat This, Not That! and Spoon University.

Generic brands are cheaper for a reason - they're mostly sugar and chemicals. A one-cup serving of Malt-O-Meal's Chocolate Marshmallow Mateys is equivalent to a whopping 23 grams of sugar. For women, that's merely two grams away from the daily recommended intake.

Golden Crisp is one of those cereals that is marketed as an all-day snack. The mascot's name, Sugar Bear, is enough of a clue to its contents. However, a quick glance at the ingredient list will confirm that the first ingredient is sugar and the third is corn syrup. That's why a cup of Golden Crisp easily gives you 21 grams of sugar.

ALSO READ: The Top 5 Most Effective Diet Plans of 2021

While the name of this cereal sounds encouraging, one serving contains 18 grams of sugar. That's already two-thirds of the daily sugar limit for women and half for men.

No mother will agree that it's "best" to serve a child one cup of cereal that contains 18 grams of sugar first thing in the morning. You may as well eat 17 gummy bears for breakfast.

Cap'n Crunch can almost count as a cultural icon, but this wholesome mascot might as well be the villainous Captain Hook. A cup of Cap'n Crunch Original has 17 grams of sugar but less than one gram of fiber.

Post's Fruity Pebbles already contains 9 grams of sugar per serving. Add marshmallows to that, and the sugar content goes up to 18 grams. It doesn't help that it has zero fiber and artificial coloring. Some of these colorants are even banned in the UK.

Both these Kellog's variants contain 16 grams of sugar per 3/4 cup. A full cup has an unacceptable amount of nearly 20 grams of sugar. Yikes.

Unfortunately, things are not looking good for Kellog's. While raisins and bran are naturally good for you, this Raisin Bran cereal isn't. Unless you consider 19 grams per serving good? Nah.

A serving of Oreo O's has 13 grams of sugar. Mega Stuf Orea O's are even worst with 17 grams of sugar. One serving is almost equivalent to the sugar content of two Original Glazed Krispy Kreme Donuts.