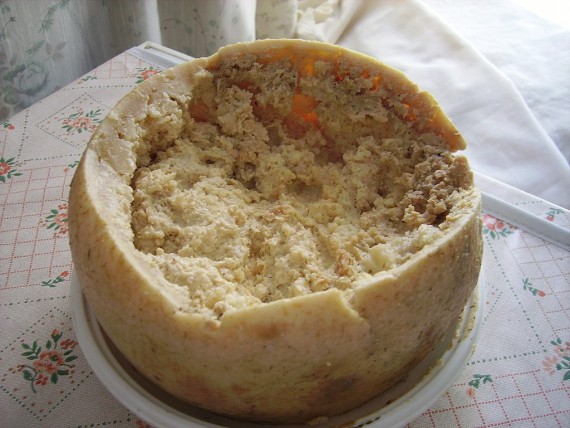 Casu Marzu has been named as the world's most dangerous cheese.
(Photo : Wikemedia Commons)

The island of Sardinia boasts a distinct style of cooking from traditional Italian cuisine. Sardinia is known for both meat and seafood dishes as the island boats a wide variety of fauna. They're particularly known for their porcetto arrosto or roasted suckling pig. However, there is one delicacy that has snagged the attention of critics, chefs, and foodies around the world. Meet casu marzu, a maggot-infested cheese that has earned the title of "World's Most Dangerous Cheese" from the Guinness Book of Records.

The World's Most Dangerous Cheese

CNN warns that casu marzu is not for the faint-hearted. Delish also adds that it's banned in the US. Why the fuss? Making casu marzu starts with fiore sardo or salty pecorino cheese. Here's the hair-raising part: skipper flies are then allowed to lay eggs in the cracks of the cheese. When the eggs hatch, maggots begin to eat their way into the cheese. They digest the proteins in the cheese and transform the hard and salty Italian cheese into a soft and creamy cheese. The process takes around three months.

When the cheese is ready for consumption, a cheesemonger will crack the top and scoop out the creamy product. One can easily spot the writhing maggots. CNN says that locals spin the cheese to merge the maggots with the creamy cheese. Others just eat it straight from the opened round, writhing maggots and all. One would need a strong stomach to overcome the immediate disgust. The thing is, casu marzu needs to be consumed before the maggots die. Dead maggots mean the cheese has gone bad and it would then have to be thrown out.

ALSO READ: Rejoice! Cheese Is a Guilt-Free Food After All

Sardinians have been eating casu marzu for centuries. It's described as "spicy," and Great Italian Chefs adds that it apparently tastes like "a very strong Gorgonzola, with plenty of black pepper notes." The texture is also easily spreadable and will go with Sardinia's delicious breads like the pane carasau.

Still, even if tourists are adventurous enough to try it, casu marzu has been banned by the European Food Safety Authority. CNN reports that it can pose a danger to human health. Maggots may go straight into the intestinal track and create microtears or holes. While there are no reported cases of this, it's still illegal to buy and sell the cheese. Fines are stiff for anyone who tries to sell the cheese. However, since it's registered as a Sardinian traditional product, casu marzu is locally respected and protected.

This is part of the allure of casu marzu. Unless you know someone in Sardinia that makes this very unusual cheese, it's nearly impossible to try. Other Italian regions have their versions of casu marzu, but it's intrinsically a part of Sardinian culture. However, if you're willing to go the extra mile, you can try finding it in other regions. CNN reveals that casu marzu is also known as casu fattittu, casu becciu, formaggio marcio and hasu muhidu. Happy hunting!

READ MORE: Drunken Cheese and Other Unusual Cheeses To Try Before You Die