Get Delivery Ideas From Netflix's "Somebody Feed Phil" US Episodes 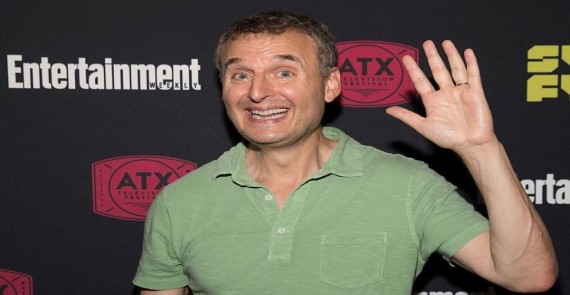 Two-time Emmy-winning television writer and producer Phil Rosenthal is no Anthony Bourdain. Neither a chef nor a food critic, Rosenthal was best known for being the creator of the hit sitcom "Everybody Loves Raymond." The permanently wide-eyed foodie was the last person many expected to host a food show, yet Rosenthal has four successful seasons under his belt with Netflix's "Somebody Feed Phil." Somebody Feed Phil isn't even Rosenthal's first rodeo on the food scene. His first food show, PBS' "I'll Have What Phil's Having," won a James Beard award in 2016.

In the four seasons of Somebody Feed Phil, Rosenthal was able to visit three other continents - Asia, Africa, and Europe. Of course, he also visited some of the best food cities in the US. While fans are anticipating a fifth season, COVID-19 has certainly made traveling and filming difficult for any television crew. Still, even jaded food critics admit to watching Somebody Feed Phil repeatedly. Here's a quick look back at Somebody Feed Phil's US-based episodes. Who knows, maybe some of the restaurants featured deliver yummy takeout.

Somebody Feed Phil US Episodes

Rosenthal visited New Orleans in the show's first season in 2018. The show opens with a stroll through the historic Bourbon Street. Rosenthal visited several of New Orleans' in-demand restaurants, including Bevi Seafood Co. for po' boys and crawfish, Turkey and the Wolf for their inventive sandwiches and booze, and Cochon Butcher for some boudin noir (blood sausage) and conversation with friend, actor, and New Orleans homeboy, William Pierce. Rosenthal also visited James Beard award-winning chef Alon Shaya and his Israeli restaurant, Shaya. According to Shaya, one of the best things to eat at the restaurant is hot pita bread with ljutenica, a Bulgarian spread made with roasted peppers, eggplants, and tomatoes. Rosenthal also met the legendary "Queen of Creole Cuisine" Leah Chase of Dooky Chase Restaurant.

New York is Rosenthal's hometown, but he's now based in Los Angeles with his family. His first stop was the famous steak house, Peter Luger, with friends and equally famous chefs Massimo Bottura, Nancy Silverton, and Liz Hong. As expected, pizza is a must in this city. Rosenthal visited three pizza hotspots - Totonno's, Di Fara, and Razza in nearby New Jersey. He also had oysters aboard the schooner, Pilot, an oyster bar with friends Phil Harris and Al Roker, and had Nathan's hotdogs on Coney Island. Be sure to watch this episode to see the rest of Rosenthal's New York adventure.

Al's Beef and Jim's Original Polish Sausage were the first two Chicago institutions on Rosenthal's list. Rosenthal also went on an architectural river tour, which he recommends to anyone who visits Chicago. It's widely known that Chicago, like New York, is a pizza town. According to insiders, Pequod's is the place to be. Rosenthal visited several restaurants in the city, but Monteverde's is probably the best. Rosenthal says Monteverde may be the best Italian restaurant in the city, and Michelin Star and James Beard awardee, chef Sarah Grueneberg, will not disappoint. Another must-watch episode.

Rosenthal packed a lot into his visit to San Francisco. He stopped by the world-famous Tartine bakery, San Francisco institution Swan Oyster Depot, and met up with culinary legend Alice Waters at the Ferry Building to take a tour of the farmer's market. He paid a visit to Petit Crenn, one of the restaurants of chef Dominique Crenn, the only female chef (so far) in the US to earn three Michelin stars. You also shouldn't miss legendary American chef Thomas Keller giving Rosenthal an intimate look at the kitchens of four of his restaurants, including the celebrated The French Laundry. Get to know these culinary legends and other SF hotspots by watching this episode.

To experience true Southern hospitality, this episode is not to be missed. While the Mississippi Delta may lack the flash and Instagram-worthy restaurants of New York, Chicago, and San Francisco, this tour around the delta will introduce you to the most delicious down-home cooking and the warmest people on earth. As Rosenthal said, "Edith Wharton had a quote, 'one of the great things about travel is you find out how many good, kind people there are.' That was never truer than about the Mississippi Delta."

The last episode of Season 4 saw Rosenthal on the beautiful island of Hawaii. He sought out intimate family-owned restaurants, high-end restaurants, and road-side stops. He had many encounters with the island's friendly natives and had a few adventures on the water. As Hawaii is also a melting pot of different cultures, Rosenthal also had a taste of Vietnamese, Japanese, and Filipino cuisines. Of course, no visit to Hawaii would be complete without tasting poi, the traditional staple food of the big island.

Catch these US episodes and the rest of Rosenthal's world-wide adventures on Netflix.

READ MORE: The Top 8 Food Accounts To Follow On TikTok