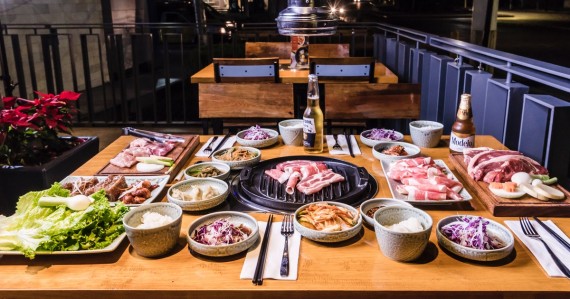 Samgyeopsal is a way of life in Korea and it's now popular around the world.
(Photo : Becerra Govea Photo/Pexels)

According to Serious Eats, Korean cuisine solidified its presence in the US in the early 2010s. Trendy sushi bars suddenly got overtaken by Korean barbecue grills, Bonchon's fried chicken eclipsed the Colonel's, and kimchi became the new miso soup. However, much of South Korea's culinary success can be credited to the irresistible samgyeopsal or grilled pork belly.

In Netflix's Korean Pork Belly Rhapsody, South Korean chef, food researcher, and writer Baek Jong Won traces the origins of the Korean food staple samgyeopsal or, as more commonly known in the US, grilled pork belly or Korean barbeque. The documentary also shows how pork became the number one protein in the country and how the culinary industry is still finding ways to maximize the whole pig instead of just using the pork belly.

ALSO READ: Must-Try Kimchi Recipes That Can Make You Crave For More

Baek Jong Won travels to Samgut Village in Yeongwol, South Korea and witnesses an annual hemp-steam barbeque event. This very old-school way of cooking pork requires hemp fabric, about 10 tons of wood, and 10 tons of stone. For the traditional hemp-steam barbeque, men would dig two pits that are wide and long enough for a whole pig to be buried. The first pit would be filled with wood and stones; the second pit would be for food. A path lined with stone will be created between these two pits so steam can travel from one pit to the other. These pits serve as an underground pressure cooker. While it takes a lot of work, the results, as viewers will see, are worth it.

Chef Baek thinks that if this steamed pork could make it to the prestigious World Championship Barbecue Cooking Contest in Memphis, Tennessee, it can snag top honors.

This first episode goes on to trace the origins of pork belly and how it rose to become the most in-demand protein in Korea. Viewers will also see how grill makers strove to perfect different kinds of grills in order to cook the best cuts of pork. In addition, the documentary shows the different ways to cook pork belly.

Episode 2 dives deeper into the meat industry and gives viewers a peek at different pig breeds and how each breed tastes different from the other. This episode also shows how Koreans are learning other ways to maximize other cuts of pork apart from their beloved belly.

Viewers will get to see how the sundae, or Korean blood sausage, is made. One cook shows how she manages to get 10 types of meats from a pig's head, such as the tongue, ears, nose, and cheeks. Guests also talk about how jokbal, or pork feet, has become Korea's most dependable takeout food. The second episode is also a showcase of different cooking methods for pork that Korean chefs now use. These methods are inspired by European countries that have perfected the art of jamon and aging meats. Viewers will also see Chef Baek's butchering and cooking skills as he skillfully carves a pig and cooks for celebrity guests.

The Review Geek says Korean Pork Belly Rhapsody can be a bit sporadic but is a documentary worth watching, especially for pork lovers. Stream it now on Netflix and keep your phone close by for Korean barbeque delivery after.