Why Hershey's Chocolate "Tastes Like Vomit"? Here's the Truth 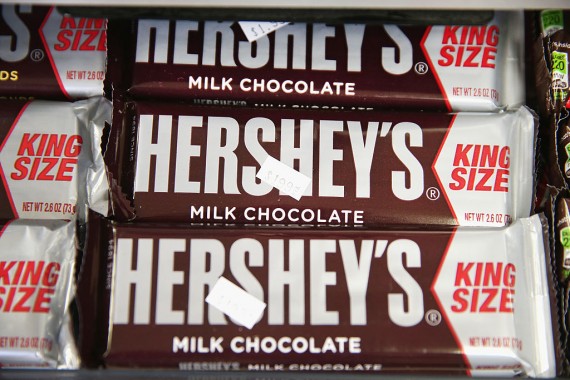 Hershey's chocolate bars are offered for sale on July 16, 2014 in Chicago, Illinois. Hershey Co., the No.1 candy producer in the U.S., is raising the price of its chocolate by 8 percent due to the rising cost of cocoa. This is the company's fist price increase in three years.
(Photo : Scott Olson/Getty Images)

Depending on who you are and whether you have been having Hershey's chocolate for almost your life, it's likely that you would have noticed a sour taste in this chocolate.

If you have, you are probably not an American or have not been having this chocolate ever since you were a child. If you have not, then it is probably because you are American, have been eating Hershey's since you are a toddler, and believe all chocolate taste this way.

For foreigners who have their own versions of chocolate, Hershey's chocolate actually tastes gross.

According to the article written by Imogen Blake, the taste of American chocolate is tangy and slightly sour.

Americans will downright deny this but will also agree that when they eat chocolates from abroad, Hershey's chocolate would have an acidic quality. The writer then concluded this is because Hershey's chocolate contains Butyric acid, an element also found in rancid butter, parmesan cheese, and, of course, vomit.

Therefore, in the minds of the Europeans, Hershey's tastes like vomit, as gross as it sounds.

The Daily Mail had reached out to Hershey's for comment, but the company is yet to explain. It did not bother giving the article the light of the day.

HuffPost, however, was able to get in touch with Hershey's director of corporate communications. According to the company leader, Jeff Beckman, there exists a lot of urban legends and inaccurate reporting about their products.

"[There] are the claims that Hershey adds butyric acid to its chocolate," Beckman said. "This is not true. ... We do not add [butyric acid] to our chocolate."

While Beckman denies butyric acid as if it is that bad, HuffPost clarifies that it is not necessarily poisonous, just stinky.

Butyric acid is a chemical that can be found naturally in the gut. This is a fatty acid resulting from good bacteria breaking down dietary fiber. It is also naturally occurring in various products such as milk, butter, parmesan cheese, red meat, vegetable oils, and many more others.

It's sometimes intentionally added to foods and perfumes because of its aromatic properties.

"Butyric acid can [also] act as a [food] preservative," Sofia Rengman of Perstorp further explained. The company deals with all kinds of chemicals, including butyric acid.

Despite what is being said of the chocolate, however, it does not take away the fact that it has done something wonderful for the United States.

For one, the company has reportedly made "special occasion" things readily accessible to the masses, as explained by Jason Liebig, a candy and brand historian. "In 1900, a chocolate bar might have been a pretty special treat, but by 1955, it was a far more typical occurrence."

This is probably why Hershey's chocolate should not be compared to the European chocolates that are not really accessible to many.

ALSO READ: Adding This To Oatmeal Can Cancel Out Its Many Benefits, Expert Warns