What Does Kamala Harris Eat When She Goes To New Haven? 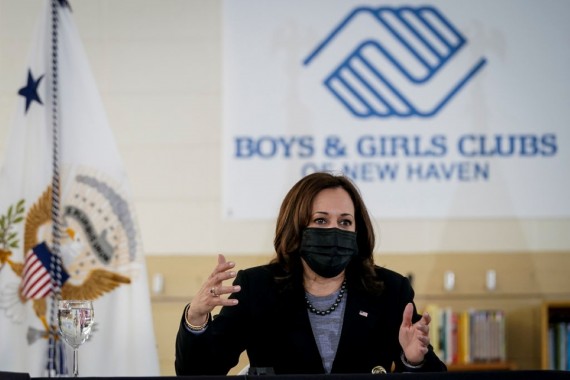 Vice President Kamala Harris is currently in New Haven, Connecticut to promote the Biden administration's $1.9 billion stimulus package. While in town for a very serious matter, locals were thrilled that Kamala Harris and her staff paid homage to one of their most beloved food spots - Sally's Appiza.

The entourage came by around 3:30 p.m. and was met by Sally's Appiza General Manager Rob Nelson and Regional Manager Oly Knudsen. Its former owners Rick Consiglio and Bob Consiglio were also present.

Eyewitness News 3 also mentioned that the Harris entourage was also spotted at another New Haven pizzeria, but it wasn't named.

Kamala Harris did a roundtable session and took questions from reporters regarding childhood poverty at the Boys and Girls Club of New Haven.

Kamala Harris is now among the famous people who've had a taste of Sally's Appiza equally famous pies. The New Haven Register recalls visits from other politicians such as former presidents John F. Kennedy and Bill Clinton. Frank Sinatra was also a frequent visitor, says Nelson.

In fact, Tony Consiglio, Sally's brother, became Sinatra's driver and close friend. They would shut down the restaurant whenever Sinatra was in town so his visit would be undisturbed.

Most recently, Nelson told New Haven Register that New England Patriots wide receiver Julian Edelman stopped by for some pizza. That was after Barstool Sports founder David Portnoy rated Sally's a 9.2/10 in his "One Bite" series and declared that New Haven is now the pizza capital in the U.S.

Sal "Sally" Consiglio opened Sally's Apizza way back in 1938. ROADFOOD reveals that Consiglio was the nephew of Frank Pepe, the owner of New Haven's first pizzeria.

The original Pepe's Pizzeria Napoletana is also found on Wooster Street and has been standing strong since the 1920s. You'll find several branches around the Connecticut area. Sally's Apizza came a dozen years after Pepe's and remained the one and only in New Haven.

Sal and his wife Flora have already passed, and Sally's Appiza was sold to investors in 2018. However, Sal's descendants and former owners Bob and Rick Consiglio remain as advisers and still stop by often.

The group who acquired Sally's Appiza had plans to go nationwide with the famed pizzeria. But for now, Sally's Apizza will produce its trademark coal-fired, brick-oven pizzas in New Haven alone.

Sally's Apizza earned the Number 9 spot in The Daily Meal's 2020 list of "The 101 Best Pizzas in America." It has also been featured by the New York Times, Washington Post, The Boston Globe, and Eater's "America's 38 Essential Restaurants."