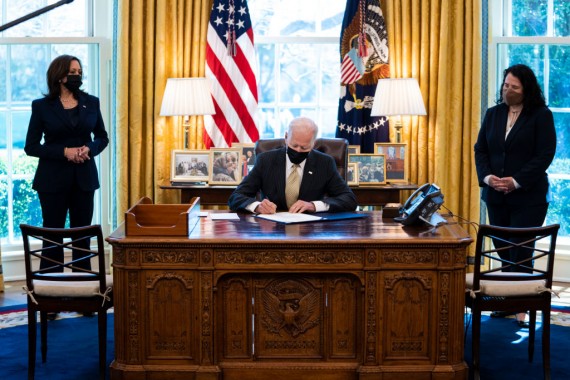 The Biden administration has announced Thursday that about 25 million people would get a boost in their food stamp benefits beginning this month under a new policy.

According to The Seattle Times, this move is a shift in policy from the previous Trump administration, whose relief policy left out some Americans, who were among the lowest-income food stamp recipients.

Former president Donald Trump's Families First Coronavirus Response Act was implemented in a way that about 40 percent of households already receiving the largest possible benefits saw no increase in their allotment.

CNN reports that this policy adjustment will add about a billion dollars to the benefits distributed monthly. It further reports that a hunger crisis has erupted in the U.S. after the spread of COVID-19 and the economic upheaval that followed.

The number of people receiving food stamps went from 36.9 million in February 2020 to about 41.4 million by November 2020. Feeding America, the country's biggest domestic hunger-relief organization, says that food banks are seeing 55 percent more people compare to before COVID-19, and that number is still expected to increase.

READ NEXT: What Does Kamala Harris Eat When She Goes To New Haven?

The Biden administration's relief package is worth $1.9 trillion and will extend the 15 percent increase in food stamp benefit until September 2021. The relief package will also provide a $1,400 stimulus payment.

This is a welcome development for California and Pennsylvania plaintiffs who sued the United States Department of Agriculture last year over access to increased benefits.

These plaintiffs were part of those low-income households that did not receive additional aid under the Trump's Families First Coronavirus Response Act.

As The Washington Post reports, the plaintiffs argued that Sonny Perdue, former President Trump's agriculture secretary, has misinterpreted a section of the Families First Coronavirus Response Act "in a way that denied millions of the neediest Americans access to emergency allotments of Supplemental Nutrition Assistance Program (SNAP)."

The Seattle Times adds that Robin Hall, one of the plaintiffs from California, said that "the pandemic made it much harder to get regular meals." Hall has been dealing with homelessness when the pandemic hit.

She has Type 2 diabetes and other health conditions and has depended on food banks and other programs when the benefits she received didn't meet the rest of her nutritional needs.

In a statement released by the Western Center on Law & Poverty, Hall noted that the emergency assistance would be a huge help to him and many others.

"I feel so honored to fight for everyone like me," he said. Being the most populated state in the U.S., California will be getting nearly $120 million in increased benefits every month.

However, households that are already receiving the increased payments of at least $95 monthly are no longer eligible for additional benefits.

Stacy Dean, the deputy undersecretary of the United States Department of Agriculture, says that it may take a few weeks to update the systems, but getting the additional benefits to eligible participants "should be smooth sailing from here on out."