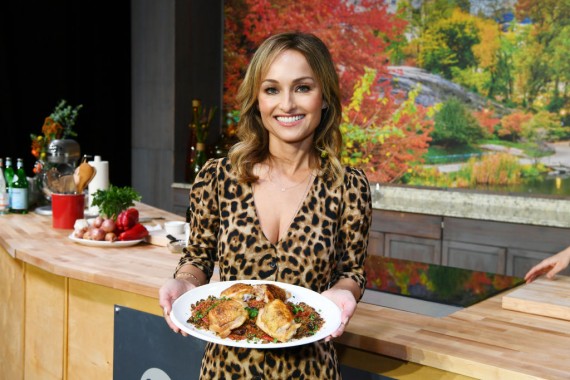 The latest book of celebrity chef Giada De Laurentiis entitled "Eat Better, Feel Better: My Recipes for Wellness and Healing, Inside and Out" is already a New York Times best-seller.

Giada De Laurentiis is well-known for her rich Italian dishes and says that this cookbook took three years to write as she had to adjust her way of cooking and stop relying on pre-packaged stuff. Eat This, Not That! reveals the healthy eating habits she shares in her new book.

Fans would have never guessed that the perpetually slim De Laurentiis was once addicted to sugar. After years of using sugar as a crutch, the reigning queen of Food Network developed digestive problems and told CNN that she began feeling "really tired, really foggy."

Once she decided to eliminate sugar, dairy, and gluten from her diet, she realized that those were truly the sources of inflammation.

In her new book, Giada De Laurentiis shares valuable advice about improving gut health, digestion, immunity, energy levels, and more. Here are some of those tips.

Load up on vegetables.

Like De Laurentiis, make vegetables a part of every meal. Raw or cooked green, leafy vegetables are a staple in her diet, and spinach, chard, dandelion greens, kale, and arugula are some of these green veggies that you can include in yours. You can also try a green smoothie for breakfast, as she suggests.

READ NEXT: 2 Sought-After Recipes From 'Stanley Tucci: Searching for Italy'

It's hard to believe that Giada De Laurentiis would tell fans to limit Italian food staples like pasta. However, readers will find new pasta recipes with a few adjustments, like using zucchini as a noodle alternative. During those times that she wants a reset, De Laurentiis says that brown rice, quinoa, and sweet potatoes are her go-tos.

Go for plant-based meals at least twice a week.

For meat lovers, try plant-based meals at least twice a week and look for alternate sources of protein. Giada De Laurentiis suggests nuts, seeds, legumes, and quinoa. Avoiding red meat for at least three days is one way to reset her eating habits when she needs to feel more energized or lose weight.

Giada De Laurentiis passes on chips, and other bagged and processed foods since she believes they are loaded with many hidden sugars and fats. Freshly prepared food is always preferable to pre-packaged meals. It may take extra time, but it will be healthier.

Speaking from her experiences, De Laurentiis says that sugar, dairy, and alcohol all have inflammatory properties that lead to multiple health problems. She said it's better to limit desserts and alcohol to just twice a week and dairy consumption to half a cup per day, but not on a daily basis.

Giada De Laurentiis drinks 12 glasses of water a day and celery juice to fight inflammation. For her simple celery juice recipe, add celery, lemon, salt, and water in a blender and spin away.