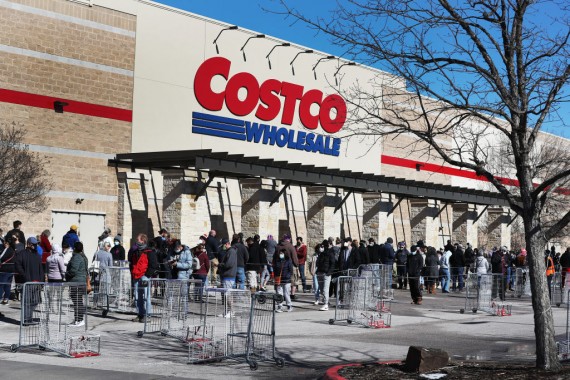 People wait to shop at the Costco Wholesale store as they look to purchase essentials on February 20, 2021 in Austin, Texas. Winter storm Uri disrupted the supply chain to stores causing many stores to run out of food supplies for customers.
(Photo : Joe Raedle/Getty Images)

Famous wholesale retailer Costco is now testing a vegan mac and cheese at 30 of its locations across California and Hawaii. The vegan edition of this widely-loved dish will come in the Jalapeno and Cheddar flavor for that extra spice.

Aptly called "Jalapeño & Cheddar Mac & Yease," this trial offering will be available in 32-ounce take-and-bake trays, and they can be found at the prepared foods section of a participating Costco store.

Chef Ayindé Howell, more known as the former personal chef for musician India Arie, is behind this revolutionary Mac & Yease recipe. He made the recipe some years ago for a sentimental value - to pay homage to his great-grandmother Mary's Sunday supper staple.

The new vegan flavor is the same recipe but with a spicy twist of added fresh jalapeños. Costco will be the very first retailer to offer this vegan-updated dish.

"'A closed mouth don't get fed'-That's a saying my Baba [grandmother] used to use a lot. It means you gotta go for it," Howell told VegNews. He also revealed that he truly got quite hands-on with getting this recipe out into the market late last year, in the middle of a pandemic.

He shared how he contacted Costo himself and sent the company the Mac & Yease to try. He then revealed that his "Baba" died last February 22, the same day he got a confirmation from Costco.

Interestingly, he was already looking to start the business in January, but they had no orders then. It appears that February 22 was indeed the fated day.

"This is a big step for a small business, for a food activist, [and] we're still going for it," he added. In 2018, Howell already tried to have more people taste this dish by partnering with Whole Foods.

Whole Foods then brought it to food bars in more than 40 locations in the Southern Pacific region, including Las Vegas, California, Arizona, Maui, and Oahu. Whole Foods also expanded the option for a limited time at its locations in Northern California.

Through the years, more and more people have started to go vegan for all the benefits they can derive from the diet and the lifestyle. One of the most cited benefits is that this diet can lead to lower cholesterol.

According to experts, a vegan diet can generally lower one's cholesterol because plant-based foods do not have cholesterol content.

According to the Physicians Committee for Responsible Medicine (PCRM), vegan diets can lower total cholesterol levels more so when compared to omnivorous diets. In particular, eating vegan can lower LDL or "bad cholesterol" by as high as 15 to 30 percent.

Moreover, because vegan diets typically have naturally low-fat content while having high soluble fiber content, cholesterol production in the liver is slowed down significantly. It also reduces the absorption of cholesterol that could be gathered from other dietary sources.