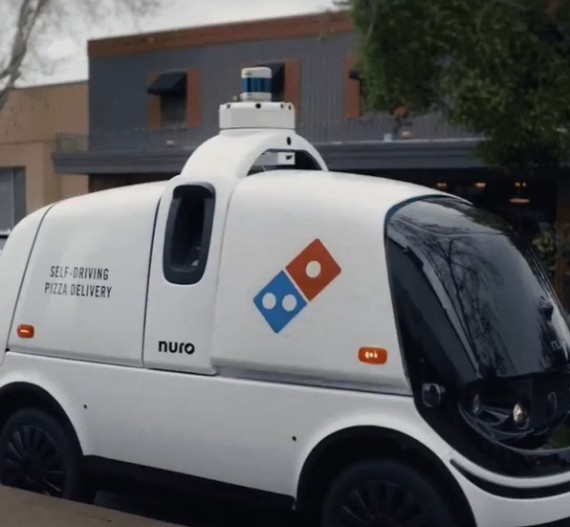 Pizza delivery may never be the same again as Domino's Pizza partnered with robotics company Nuro for a completely new method of delivery.

As Thrillist reports, customers in Houston's historic Woodland Heights neighborhood can order and pay through Domino's website and have their pizza delivered by a fully autonomous delivery vehicle.

This robot car, called the R2, can be tracked through a customer's phone, and once it reaches its destination, customers will have to input a unique PIN on a built-in keypad.

Once the R2 receives the proper PIN, the unit's doors will open, and customers can retrieve their order. At this time, this experimental delivery method is being tested in one location. The only participating location, Thrillist says, is at 3209 Houston Avenue.

According to CNN Business, Nuro's R2 is the first human-free delivery vehicle that the U.S. Department of Transportation granted regulatory approval. The Verge reports that the R2 vehicles have already been delivering groceries and medicines in Houston for about two years.

The Washington Post reported about the Nuro and Domino's partnership as early as June 2019, but COVID-19 may have played a part in its delay.

Domino's announced on Monday that the R2 vehicle will start deliveries this week. It will be a part of a pilot program that will be limited to one location for now.

On Domino's Instagram account, this news was met with mixed reactions. Some users commented that this delivery method would be taking jobs away from people, while some can't wait to try this robot delivery.

A few people have also pointed out the possibility of vandalism and that they won't be surprised if the R2 ends up being spray-painted or eventually have its tires stolen.

Still, innovation is not without risks. This is not the first time that Domino's has tried something similar. CNN Business reports back in 2017 that the company tested a self-driving Ford Fusion hybrid to deliver pizzas in Ann Harbor, Michigan. They also tried using a drone for the same purpose in the U.K. as early as 2013.

This time, Domino's senior vice president and chief innovation officer Dennis Maloney says that the R2 delivery program will allow the company to "better understand how customers respond to the deliveries, how they interact with the robot and how it affects store operations."

Only time will tell if these experimental methods of delivery can truly replace conventional ways. While the pandemic has increased the demand for deliveries of all kinds, the R2 and similar vehicles also depend on current road infrastructures, and requirements may not always be met.

After years of trying to launch self-driving delivery vehicles and a fatal test vehicle accident, CNN Business adds that Uber has sold its self-driving vehicle program to a company called Aurora.

Pizza Hut also announced in 2018 that they were working with Toyota on the same technology. So far, only Domino's is road-ready. If you live in Woodland Heights, Houston, you can give it a shot.