Hotdog Toppings: Ketchup Not The Favorite, Worst Condiment Is a German Dish 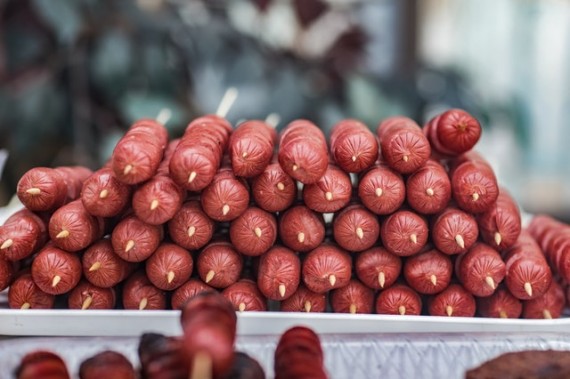 Hotdogs are so versatile. They can be eaten in so many ways, and with so many condiments. From ketchup, mayonnaise, and mustard to soy sauce, hotdogs manage to taste good. But there is something many hotdog-lovers believe should never be paired with hotdogs, or placed into their hotdogs.

According to a survey done by Mashed on what makes the greatest hotdog toppings of choice by ordinary consumers, cheese is the most preferred, followed by chili, and then mustard and ketchup. Relish is not as favored as expected but it's not the worst in people's opinion. The second-most hated condiment or topping is tomatoes and the most hated is sauerkraut. It may be new to some people's ears, though, considering it's a dish of German descent.

If you are one of those who have heard it for the first time, do not fret. You might not be missing out much, since it is the least favorite topping of them all. One Redditor even described it as being "evil and nasty."

What is sauerkraut anyway? And why do people even bother using it as a hotdog topping?

It's a tangy fermented cabbage dish of German descent that was particularly popular during the Second World War.

The survey does not mean it is not edible or it does not have its own legion of fans. At present, there are people who are even making them by batches at home and placing them on mason jars. Maybe it's not only good when it is placed on top of hotdogs. Some have used sauerkraut as pizza toppings with no violent reaction.

Speaking of hotdog condiments or toppings, one of the particularly well-liked ones, ketchup, is said to be in a shortage -- at least when it comes to ketchup packets by Heinz. Because people have taken to ordering online and having their food delivered, restaurants reportedly are already facing a shortage of ketchup packets.

According to analysts however, there is really no shortage of raw materials to make these, but the COVID-19 pandemic situation has certainly made things quite complicated.

Therefore, restaurants are called to be more mindful of how they give ketchup packets away. Instead of giving everyone the same number of packets, they can ask first if the client truly wants them and how many exactly. It is not that strange to see ketchup packets, unopened and unused, thrown in the trash bin. Such a waste - especially if they go so well with hotdogs.

The weird shortage in ketchup might correct itself once the pandemic is over - or if majority of people will be vaccinated already so that things can relatively go back to how they were. Because of the pandemic, several unprecedented shortages have also taken place - in toilet paper, personal protection equipment, baking yeasts, and jigsaw puzzles.

Kraft Heinz also told USA TODAY that it is already working to increase supplies, by expanding its manufacturing lines so that production can be boosted by about 25% for a total of more than 12 billion packets a year.