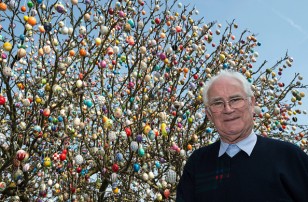 Weird Easter Traditions All Over The Globe

Here are some of the more unconventional ways some countries do their Easter festivities..

A recent study by the Environmental Working Group (EWG) titled "U.S. Fish Advice May Expose Babies to Too Much Mercury" said that it may be risky to adhere to the federal government's recommendations on seafood and mercury, potentially resulting in women consuming excessive amounts of the wrong type of fish.

Here's How To Survive New York Without Buying Food

Comedian and filmmaker Jeff Seal spent four nights in New York City looking for food, in the garbage! Equipped with just gloves and head lamp, he proved that a person can survive in NYC without having to buy food.

Gerber Recalls Batch Of Organic Products Due To Spoilage

In a public statement released by the FBA or the US Food and Drugs Administration, Gerber announced the recall of some of their organic food products on March 24.

Taking a cue from Starbucks, McDonalds has announced that it would be launching a loyalty program, which is expected to be implemented by the end of 2016 or early next year.

A Fool's Guide To Having A Kickass Barbecue Party

These few tips will make the day great.

3 Unique Burger Patty Ingredients You Should Not Miss Out

Here's a quick list of burger patties and their ingredients you would want to try out.