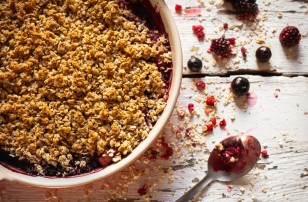 Oats are a filling but boring breakfast staple. Baked oats, on the other hand, are yummy and TikTok's latest viral food trend.

"Friends" fans rejoice. There's a new ice cream inspired by the NBC sitcom and it comes in a rare coffee flavor.

Try These 3 New Lumpia Recipes With a Twist

People saw in TikTok a lumpia filled with both cream and boba, drizzled with brown sugar sesame glaze.

Here are 5 Best Veggie Burgers in PH, According to PETA

Veggie burgers can hold their own against standard, meat-based burgers. If you are a vegan visiting or living in the Philippines, do not think veggie burgers can only be found in other countries.

After announcing the Crunchwrap Supreme, which had some avid fans jumping up and down, the famous chain now said it's bringing one of the fans' favorites - the Quesalupa.

Note that Starbucks' Cinnamon Toast Crunch cannot be ordered using this name exactly, or else you would be met with some raised eyebrows.

Seitan Is the New Star of Tiktok Food, but Beware of Risks

Seitan may sound new as a meat alternative, but it has actually been around commercially for years. Is it safe to eat all the time, though?

While the name "Speedy Sausage Pizza" is intriguing, Jamie Oliver's masterpiece raised some eyebrows because it had grapes as toppings.

Celebrate National Oreo Day by dunking one or two oreos in a glass of milk or troop to Dairy Queen and get their buy one, get one deal.

Waffle makers are not exclusively for making waffles. Below are four things you could try making with your waffle maker.

Here's your chance to score Wendy's chicken nuggets for free until March 14.

The creation of what we now know as pizza and love started in Italy. The core contents of pizza are dough, toppings, and sauce. As simple as this dish is, there are hundreds of variations of it, and it is the basis for a very healthy and profitable industry worldwide.

Does Kate Winslet regrets how her baking and eating all her goodies during lockdown had affected her shape?

As the world, including the United States, grapple with finding the perfect solution to climate change, one aspect that they might be overlooking is food waste.