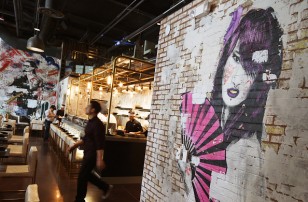 OpenTable Releases List of Top 10 Restaurants in the United States

Reservation service OpenTable has announced its top 10 restaurants in the United States for 2016.

Study: Tomatoes May Combat the Effects of Radiation

According a group of professors in Manchester, England, tomatoes may be effective in countering the harmful effects of radiation in the human body.

The latest version of the treat is filled with matcha, a type of creamy Japanese green tea.

Meat Substitutes as Good as Real Meat but Safer

Recently, the Native Food Café in Bridgeport Village, Portland, OR, was bustling with customers who crowded around the counter to order for nachos, burger, chicken wings and other dishes. One customer was happily digging in the "Soul Bowl," a combination of rice, beans and veggies, but it appeared similar to and tasted like chicken strips on top!

A-list actress Gwyneth Paltrow doesn't believe in ruling out any kind of food, saying its not realistic to forbid her children to drink Coke or eat cakes.

Rabbi Margaret Frisch Klein is not having financial issue in her family, but she decided to cut her food budget and live the way American people with limited resources are eating from day to day.

There's Such Thing as Fried Chicken Ice Cream and It's Glorious

In the upcoming Karaage Festival in Fukuoka, Japan, one unique menu item is sure to turn heads and make our stomach tremble with excitement, fried chicken-flavored ice cream!

This month, no discussion is more important than the Indio's Coachella and Chicago's Pizza Summit.

If there are other things people are waiting for during the baseball season, well, It's obviously the food. To entice sports fans to come to the games, Tigers offers new food for people to try this season. The list includes deep fried Oreos and fried bologna.

Eating hamburgers is part of the American culture. Through the years we've seen amazing evolution from the simple beef patty to many other different varieties. But lately one burger is making a name for itself, the sushi burger.

Sushi ingredients suggested between two buns made of sticky rice and a sesame seed is the most recent Instagram food trend.

Starbucks decided to test the waters by offering a new alcohol infused drink that some say is actually an alcoholic frapuccinno. Sadly, it's only available in Japan.

The sight of food truck means convenience in buying food. Food trucks give customers the satisfaction of being able to buy their favorite food almost anywhere. We found a different kind of food truck. They do deliver food as well, but for free.

Republican Presidential candidate Donald trump and his unconventional view on things had led to a lot of discussions and debates. Clearly, he had severed relationships with some groups while gaining support from others. One thing he is adamant about is the issue of illegal immigrants. He said he is planning to deport 11 million undocumented immigrants. But looking at the data, reports say this can highly affect food production in the US because half of America's farmers are undocumented immigrants. This means, if Trump wins the US might face food shortage due to lack of workforce.