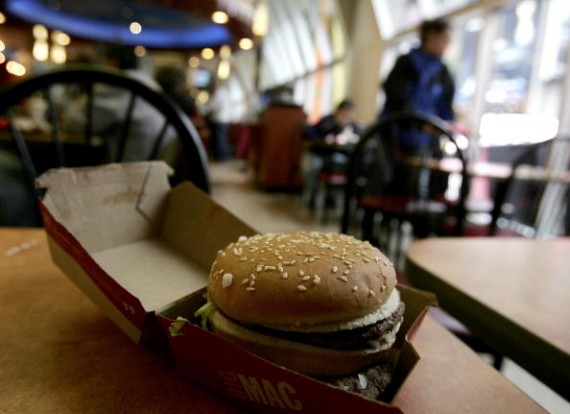 Mc Donalds introduces a bigger and a smaller version of the Big Mac.
(Photo : Photo Illustration by Spencer Platt/Getty Images)

Mac lovers who are not quite satisfied with the size of the regular Big Mac, fret no more. McDonald's is set to answer the varied size preference among customers of their iconic burger by introducing a bigger as well as a smaller version of the Big Mac.

The fast-food giant is currently testing a big version called the "Grand Mac" as well as a smaller version called "Mac Jr." in their outlets in the Dallas and central Ohio areas, reports Yahoo News. Apparently, McDonald's want to gauge consumer reception of these two new Big Mac variants before rolling them out on a national level.

According to the company, the Grand Mac should answer the need of consumers who want a more substantial Big Mac. The burger consists of two one-sixth-pound patties making its total meat content a third of a pound. Priced at $4.89, the Grand Mac is the chain's response to competitors' bigger offerings which made the regular Big Mac almost puny by comparison.

On the other hand, McDonald's offers the Mac Jr to people who prefer smaller servings. Marketed as the perfectly-sized burger to eat on the go, Mac Jr is basically a single-layer Big Mac and is priced between $2.39 and $2.59.

For comparison, the regular Big Mac has a one-fifth pound of beef, reports Fortune. The iconic signature sandwich was fist offered in 1967 and remains almost unchanged to this day.

The latest tweaking in the Big Mac size is a continuation of McDonald's ongoing tests in the hope of aligning its menu with changing customer preferences. This comes after the chains' highly successful all-day-breakfast concept which saw a turnaround of the company's finances by the end of last year, a trend that the company hopes to continue and even improve on.

Mike Andres, McDonald's USA president, confirms that the chain is trying to improve every item on its menu, including the classics. McDonald's already tried bigger burgers and even introduced kale in the past.

Banana Dangers: Beware of Spider Eggs in This Yellow Fruit