An odd discovery happened in nature last July 2015, when a group of researchers from Slovakia captured an unusual Dalmatian Algyroides lizard, scientific name Algyroides nigropunctatus in Dedaj village, Metohija, Kosovo. It is commonly found in the Mediterranean areas and areas in the Balkans. The lizard seemed to display an exotic trait when the researchers discovered the cold blooded animal because it has trifurcated tail, or in layman's term, it grew three tails instead of one.

Lizards have been long known to have the capability to regrow their severed tails. It is a unique trait that they manifest. Finding a two tailed lizard is rare in itself, but to have found a lizard with tree tails is quite out of this world. "I have been studying reptiles for a long time and examined hundreds or maybe thousands of specimens, but this was my very first three-tailed lizard," Daniel Jablonski, a biologist at Comenius University in Bratislava, Slovakia, co-discoverer of the lizard, said. 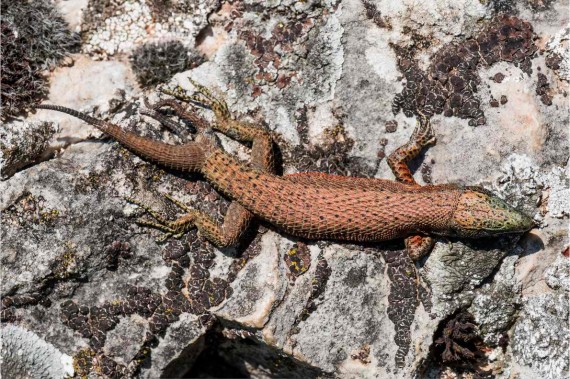 The three tails of the lizard started to sprout about 10 mm posterior to its cloaca, with the longest one measuring  30 mm, followed by a 15 mm one and last but not the least, the a 10 mm tail. Upon closer look, the researchers found that despite the abnormality the animal displayed there were no signs of health problem or deterioration. The tail also was of different colors from each other, which begs the question how is it possible? There are no other cases of trifurcation with this species, researchers said.

The researchers have come up with a theory explaining that instead of the lizard having severed his tail in a predatory attack or in an unsuspecting accident, the case with the Dalmatian Algyroides is an entirely different event. It seems that the lizard lost all of its tail in a crushing injury to the spinal cord leading to the fragmentation of the vertebrae and subsequent separation of individual regenerating tails. The specimen was not collected by the researchers and was freed after close inspection and recording. The study is published in journal Ecologica Montenegrina.