How Much Sugar is in Your Starbucks Coffee? 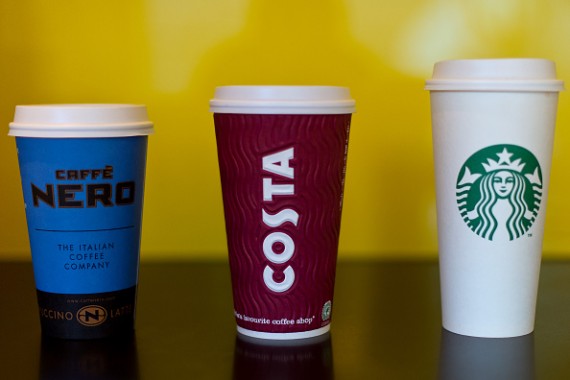 LONDON, ENGLAND - FEBRUARY 18: (L-R) A grande Cafe Nero, large Costa Coffee and venti sized Starbucks take away cup on February 18, 2016 in London, England. Yesterday Action on Sugar announced the results of tests on 131 hot drinks which showed that some contained over 20 teaspoons of sugar. The NHS recommends a maximum daily intake of seven teaspoons or 30 grams of sugar.
(Photo : (Photo by Ben Pruchnie/Getty Images))

It was proven before that canned soda, energy drink, and other beverages contain way too much sugar than the average amount recommended for a person's dietary requirements. And a recent study shows that even your favorite drinks like Starbucks coffee contains a "shocking" 25 tablespoon of sugar in each cup.

According to FDA's recommendation, people should limit the intake of added sugar at 12.5 teaspoons (50 grams) every day.

The group Action on Sugar did a survey on 131 flavored hot drinks  and they "found 98 percent would receive a red label for high sugar content under guidelines drawn up by the Food Standards Agency" according to Daily Mail.

The group pointed out that this extremely high sugar level can fuel obesity. Other brands have been tested as well and also yielded high sugar content. The hot beverage brands they have tested include Starbucks, Costa, Caffe Nero and KFC.  Daily Mail's report posted the list of worse offenders based on the study conducted by Action On Sugar. "The worst offender was the large - or venti - serving of the Hot Mulled Fruit drink from Starbucks. It comes with chai, orange, and cinnamon and contains a staggering 25 teaspoons of sugar per cup - more than three times the recommended daily amount for an adult. The five top offenders are Costa Coffee's Chai Latte, Starbucks' White Chocolate Mocha with Whipped Cream, Starbucks' Signature Hot Chocolate, KFC's Mocha and Caffè Nero's Caramelatte".

In an interview, Kawther Hashem, Nutritionist, and researcher at Action On Sugar said "They are laden with an unbelievable amount of sugar and calories and are often accompanied by a high sugar and fat snack...Our advice to consumers is to have a plain hot drink or ask for your drink to contain a minimal amount of syrup, preferably sugar-free, in the smallest serving size available".

The Guardian also mentions that according to the campaign, among the 131 tested beverages, Starbucks' Hot Mulled Fruit venti cup was the worst offender.  "The campaign group named Starbucks's Hot Mulled Fruit (grape with chai, orange and cinnamon venti) as the worst offender. At 25 teaspoons of sugar, it contains more than three times the recommended maximum adult daily intake". Costa's coffee emerged as second with 20 tablespoons of sugar in their drink.

The group claimed that they were able to call the attention of the companies and that they are willing to re-adjust their standards to produce healthier drinks.  "Starbucks told the Guardian it was committed to reducing added sugar in its indulgent drinks by 25% by the end of 2020, and that "all nutritional information is available in-store and online", The Guardian reported.

With these developments, people then are given a chance to take precautions upon themselves. Learn to choose healthier options or maybe skip the sugary toppings for once. Maybe next time you'll think twice before ordering a venti cup of your favorite hot beverage. Perhaps lose the whipped cream on your next cup?