Double-Dipping: Merely a Nasty Habit or a Food Safety Problem?

Double dipping is something that people want to avoid but sometimes end up doing. Let's say for example, it's Friday night movie marathon with the family. There are chips and dips, popcorn, to name a few.

When there are chips and dips, it has always been the golden rule not to double dip. Once you have taken a bite of the chip after dipping it, your saliva is already mixed with the chips and when you double dip, it also means that your saliva is also in the dip. If you are the only one dipping your chip, that's acceptable; However, if there are other people sharing the dip, it's a big NO.

The Conversation said that a research team from Clemson University came up with a series of experiments to discover what really happens when people double-dip. They tested to check if there is bacterial transfer. They also checked whether changes in the acidity level of the dip are after it is affected by bacteria. Members of the no-double-dipping enforcement squad, prepare to have your worst, most repulsive suspicions confirmed.

It is a known fact that the bacteria in the mouth are transferred to the food when you take a bite. But how does goes from the mouth to the dip. Students then started to make a comparison of the crackers that were bitten and the ones that are new and not bitten at all and measuring how much bacteria has transferred from the cracker to the water. 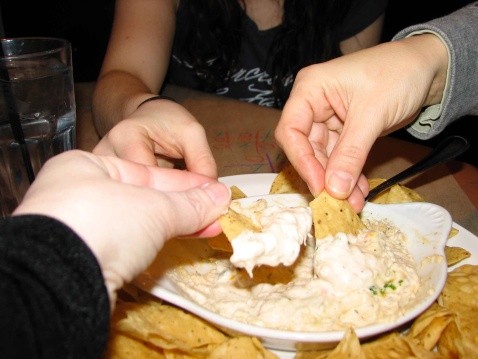 The bacteria now are infecting the entire container. Salsa, on the other hand is more acidic, After 2 hours, the acidity of the salsa had killed some of the bacteria. They discovered in the experiment that when hosting a party it would be better to have cheese dip as it runs out faster because there are particles of crackers or chips in it. This can lower the chance of people double-dipping.

If you detect double-dippers in the midst of a festive gathering, you might want to steer clear of their favored snack. And if you yourself are sick, do the rest of us a favor and don't double-dip.