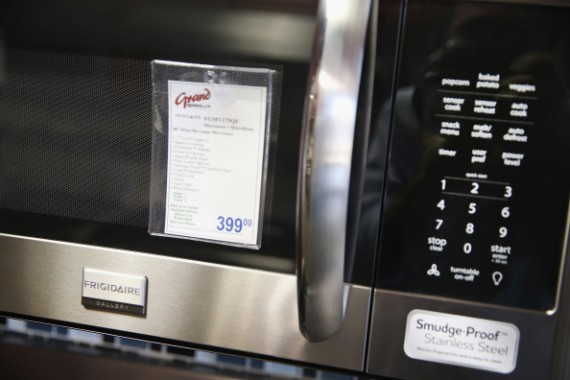 CHICAGO, IL - SEPTEMBER 08: A Frigidaire microwave oven is offered for sale at an appliance store on September 8, 2014 in Chicago, Illinois. Sweden's Electrolux AB, makers of Electrolux and Frigidaire appliances, announced today that it has agreed to purchase General Electric Co's (GE) appliances business for $3.3 billion in cash.
(Photo : (Photo by Scott Olson/Getty Images))

The microwave system is very simple, "Materials containing water (i.e. food and body tissues) absorb the energy from microwaves. Once absorbed, the energy turns into heat, which is how a microwave cooks or heats food. Interestingly, microwave-safe food containers do not get hot unless there is food in them, in which case the heat is secondary to the food" according to Built Lean.

Meanwhile, Forbes said: " The electromagnetic waves act on the water molecules. Water molecules are dipoles; they have a north and a south magnetic polarization. The microwave forces the molecules to spin up and down, reorienting themselves to the direction of the microwave."

But  the question remains, is it safe? Built Lean enumerated the safety concerns in using a microwave.

1.    Thermal effect: Food cooked in the microwave tend to get too hot and a lot of people experience being burned from extremely hot food. That's the reason why there is a hot surface warning in most microwavable food packaging.

2.    Food safety: "Microwaves do not evenly cook thick pieces of food. The potential danger is that the insides may not reach a temperature high enough to kill bacteria and other organisms that can cause illness."

Bart Loews from Quora also answered some pressing questions about the use of microwave oven.

Do microwaves cause nutrient loss?

Lowes said, "Keeping in mind how microwaves work, I'll say yes, but so does any cooking.". He noted that in any type of cooking, a certain level of nutrients is lost in the process. Nevertheless, he added, that it is worth to take note that some foods are better cooked in the microwave. "The reality is that microwaving will actually keep more of the nutrients in the vegetables because it is much quicker. As a matter of fact, in most cases, the microwave is a better way of cooking your food with regards to keeping the nutrients intact because of its speed and efficiency."

In the end, we should not just consider the cooking method. Microwave-ready or processed foods sometimes contain preservatives which make your meal unhealthy, and not because of using the microwave oven to cook or reheat it. When it comes to nutrient loss, Loews has this to say: "Microwaves don't really affect the nutrient content of food in any different way than conventional cooking does, nor do they literally "nuke" or irradiate your food. It's perfectly safe to eat."