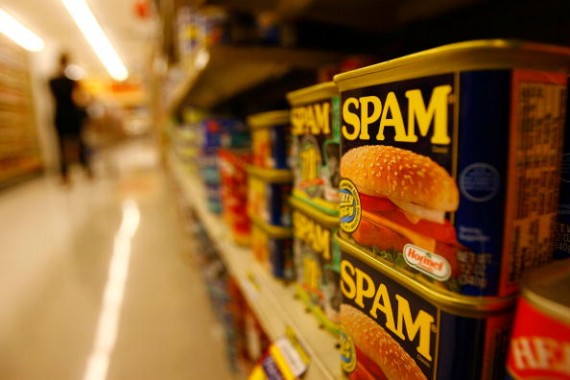 SIERRA MADRE, CA - MAY 29: Spam, the often-maligned classic canned lunch meat made by Hormel Foods, is seen on a grocery store shelf May 29, 2008 in Sierra Madre, California. With the rise in food prices, sales of Spam are increasing as consumers look for ways to cut their food bills. According to the US Agriculture Department, the price of food is rising at the fastest rate since 1990. Increasingly expensive staples include such items as white bread, up 13 percent over last year, butter, up nine percent, and bacon at seven percent. The increasing sales have translated to 14 percent higher profits for Hormel. Spam was created in 1937 and was popularized as a staple food for World War II Western allied forces
(Photo : Photo by David McNew/Getty Images)

Arguing that too-specific warnings could be detrimental to the consumers' health, California decided to delay the implementation on a state-required warning label on cans that are lined with the chemical BPA, according to an L.A. Time Associated Press article.

Apparently, the decision not to push through with the labeling on cans with BPA liners is based on the argument that putting the warnings on the items themselves might scare stores and shoppers in poor neighborhoods, whose access to fruits and vegetables are limited to the canned ones.

In lieu of the labeling on metal cans, California would require stores to post a more general warning to be located at checkout counters by May 11. The general warning will outline the dangers of BPA and will inform customers that some canned and bottled products have liners that contain the chemical.

Of course not everybody was pleased with this latest announcement. Physicians for Social Responsibility-Los Angeles Executive Director Martha Dina Arguello described the decisions as ridiculous and paternalistic. Arguello added that "I just can't imagine that it's a better idea not to let us know what's in our food."

Even shoppers are dismayed by the change of plans. Carrie Del Signore, a Sacramento shopper, was quoted in a KCRA article as saying, "I'd like to know whether or not it'll kill me or mess up my body in some way."

Another Sacramento shopper, John Walldow said: "The more information you get, the better because you know there's a lot of things we don't know."

The highlights the recent trend of consumers getting pickier with their shopping choices and puts pressure on food companies to be more honest in divulging information that might be used as a basis for their purchases.

Created in 1891 by a Russian chemist, BPA or Bisphenol-A  is a chemical used to create plastics and resins. Currently, epoxy resins containing BPA are used to line or coat the inside of metal products like bottle tops, water supply lines and food cans according to a MayoClinic article by Brent Bauer, M.D. In addition, certain plastic food containers contain BPA where it is feared that heating these plastic containers could potentially release the chemical to the food being stored.

According to a Dr. Mercola article, BPA could have the following effects:

2.    Structural damage to your brain

However, the FDA continues to insist that BPA is safe according to a Newsweek article. FDA spokeswoman Theresa Eisenman is quoted in the article as saying "BPA used in food packaging does not present a risk to consumer health."