Those Trying to Conceive Should Drop Their Caffeine Fix: Tips Even Husbands Should Follow 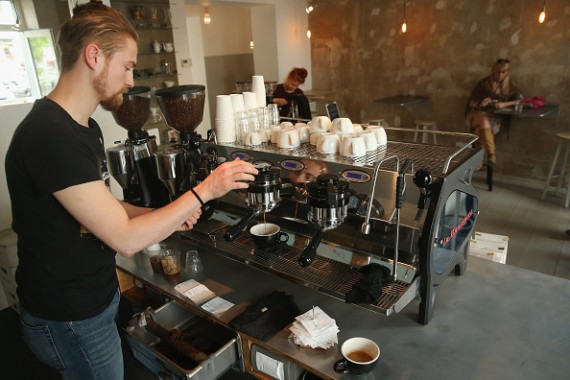 BERLIN, GERMANY - MAY 04: A barista prepares coffee from an Italian espresso machine at Bonanza Coffee cafe in Prenzlauer Berg district on May 4, 2015 in Berlin, Germany. Berlin is among Europe's most popular urban tourist destinations and the city offers a rich cafe and coffee culture
(Photo : Photo by Sean Gallup/Getty Images)

For years, obstetricians have always suspected that caffeine consumption among pregnant women might increase the risk of miscarriage. In fact, a WebMD article by Susan Davis cites a 2008 study concluded that pregnant women drinking two cups of coffee or 5 cans of caffeinated soda could potentially double the risk of a miscarriage.

However, this finding was reversed in 2010 and moderate coffee intake is back to being safe even for pregnant women. Released by the American College of Obstetricians and Gynecologists, a review was made of existing studies wherein it concluded that there is "no evidence that caffeine consumption increases miscarriage risk among women with light or moderate caffeine consumption."

So coffee was safe again, until now. A very recent study now concludes that contrary to the 2010 finding, coffee consumption could actually increase the risk of miscarriage. But this time, it is even worse - both the parents' caffeine consumption in the weeks prior to conception could be adding to the miscarriage risk. Yes, you've read it right. Even daddy's coffee drinking could increase the chances of a miscarriage.

The newly released study was done by researchers at the National Institutes of Health and the Ohio State University and based on data obtained from the Longitudinal Investigation of Fertility and the Environment (LIFE) study, according to a Yahoo News article. Data was based on 501 couples in Michigan and Texas during the period 2005 to 2009 and includes several factors including fertility, lifestyle and exposure to chemicals in the environment.

In the current study, researchers focused on cigarette use, caffeine consumption and multivitamin intake amount 344 couples. According to the article, 98 of the 344 pregnancies being considered ended in miscarriage, or a roughly 28 percent miscarriage rate.

The research adopted a statistical concept called hazard ratio. This means that a ratio greater than one indicates an increased risk for miscarriage each day the following conception. Conversely, a ratio less than one indicates a reduced daily risk. Here are the study's findings:

1.       When the pregnant woman consumed more than two caffeinated drinks a day, the risk of miscarriage was noted to be 1.74.

2.       If the husband or male partner drank the same amount of coffee or more, the risk of miscarriage is measured at 1.73, which is almost the same risk as the woman's caffeine drinking.

3.       Taking a multivitamin supplement in the weeks prior to the pregnancy greatly reduced the miscarriage risk which is measured at 0.45 or equivalent to a 55 percent risk reduction.

Commenting on the findings, lead author Germaine Buck Louis, director of the Division of Intramural Population Health Research at the NIH, said: "Male preconception consumption of caffeinated beverages was just as strongly associated with pregnancy loss as females'."

You've heard it, boys. Better get decaf next time.