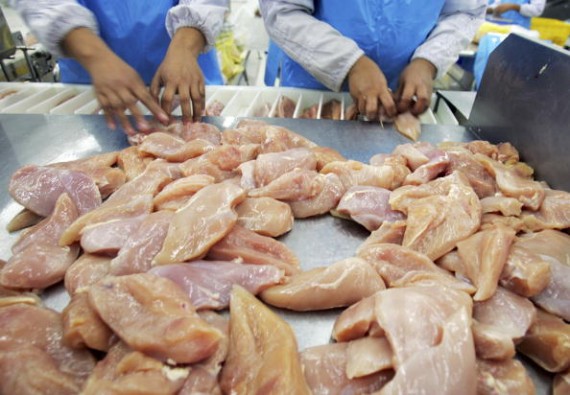 CHONBURI, THAILAND - JULY 9: Chicken breasts get sorted at the Thai Poultry Group (TPG) chicken processing and slaughtering factory July 9, 2005 in Chonburi, Thailand. The factory has 1,200 employees that are able to deal with 10,000 birds per hour at full capacity. However since Bird Flu outbreak, the processing plant has had to cut its production almost 40%. The Thai Poultry Group exports to European Union, Japan, Middle East, Hong Kong and South Korea.
(Photo : Photo by Paula Bronstein/Getty Images)

South Korea has culled more than 11,000 ducks as a preventive measure against the bird flu.

Some of the ducks at a poultry farm in the northwestern city of Incheon had tested positive for a virulent strain of the bird flu this past Saturday, according to the Ministry of Agriculture, Food and Rural Affairs.

According to Headlines & Global News, the ministry said also that in order to prevent avian influenza from spreading, all 11,604 ducks were slaughtered. The farm has also been placed under quarantine. The strain was identified as H5N8, which is a subtype of the influenza A virus that is not as pathogenic as the H1N1.

The issue was confirmed at the farm after the Animal and Plant Quarantine Agency and a livestock research center in the region conducted a thorough investigation when the farm reported that dozens of their ducklings had mysteriously died in numbers.

Since the confirmation, the ministry has issued an order banning all poultry and eggs from leaving any farms in the Gyeonggi Province. The order will last through April 2. In addition to this measure, the city also made two disease monitoring posts that will be responsible for disinfecting all vehicles that enter and leave the city. The posts will stay until health officials can determine and classify that there is no transmission risk involved.

The North Chungcheong Province also set up same posts, while Jeju Island is not allowing the entry of any poultry, eggs and birds coming from the Gyenoggi Province, Seoul and Incheon.

It was in November 2015 the last time that South Korea had a confirmed case of the bird flu. The concern involved was also the H5N8. An infection typically goes down to respiratory flu-like symptoms, such as a headache, coughing and fever. Although there are symptoms, confirming an infection requires laboratory tests.

News of the bird flu came shortly afterwards the country dealt with an outbreak of foot and mouth disease (FMD) that affected pigs from a farm in Gimje last January.