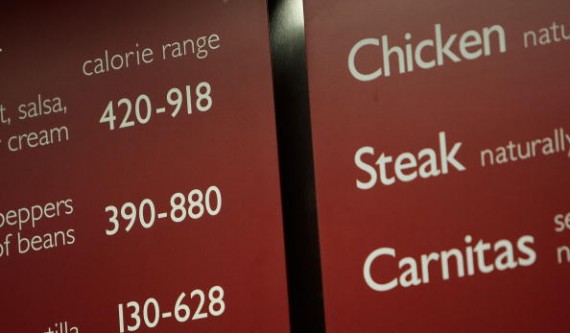 NEW YORK - JULY 18: Calories are listed next to menu items at a Chipotle Mexican Grill July 18, 2008 in New York City. New York is now the first city in the country to implement a law forcing chain restaurants to post the calorie count of each food next to the items on their menus.
(Photo : Photo by Chris Hondros/Getty Images)

Portion control is an essential part of healthy eating. No matter how healthy one's food choice may be, it is always bad when one is unmindful of how much one eats.

Eating out is always a problem because menu items do not usually come with any information on the number of calories they contain. For this reason, it is very easy to exceed one's calorie requirements.

To give consumers the opportunity to make well-informed food choices, the U.S. Food and Drug Administration (FDA) has a regulation requiring calorie labeling on restaurant menus and vending machines, a regulation that is still unimplemented up to this day.

And customers might have to wait another year for the law to take effect. According to a Yahoo News article by Mary Clare Jalonick, the implementation of the calorie labeling on menu items will be delayed until next year. Apparently, the FDA is still finalizing the guidelines for retailers and supermarkets who are also required to also display the calorie count of their packaged meals.

According to Robert Rosado of Food Marketing Institute, the delay is only fair since the rules are complicated. In addition, Rosado said that the retailers are concerned they could get it wrong. "Maybe the font size isn't right for their label or they rounded the calorie count the wrong way," added Rosado.

It is not the first time that the implementation of the new regulation has been postponed. Released last 2014, restaurants and retailers originally had until he end of 2015 to comply with the rules. Last summer, the deadline was pushed to the end of 2016.

Fortunately, some places like Vermont, Montgomery County, Maryland and New York City already require calorie labeling on menu items. On the other hand, other states, in anticipation of the federal rules, have put off their own laws. For instance, California had a similar law back in 2008 which is still unimplemented until now.

At the moment, even the FDA is still unsure when exactly the new guidelines for retailers will be finalized. According to an FDA spokeswoman Lauren Kotwicki, "The FDA cannot speculate on the timing of when final guidance will be issued."

In the meantime, consumers might head to some restaurant chains that already includes calorie counts on their menu. McDonalds, Starbucks, Au Bon Pain and Panera are now providing the calories counts of their menu items well ahead of the federal guidelines' effectivity.