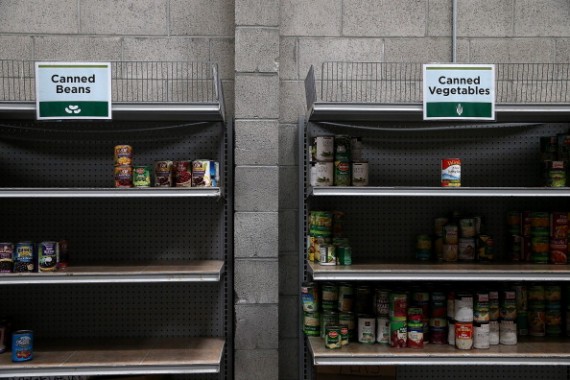 SAN FRANCISCO, CA - MAY 01: Shelves of canned foods sit partially empty at the SF-Marin Food Bank on May 1, 2014 in San Francisco, California. Food banks are bracing for higher food costs and an increased demand for food from the needy as food prices are skyrocketing due to drought conditions in several states.
(Photo : Photo by Justin Sullivan/Getty Images)

Canadian-based Environmental Defence has some worrying news for people who are wary on the potential effect of BPA. It turns out that even after years of lobbying, BPA containing canned goods are still quite common.

According to a CBCNews article, Environmental Defence found that 18 of 21 cans purchased in Ontario still contain BPA. Commenting on this finding, Environmental Defence toxic program manager Maggie MacDonald is quoted by CBC as saying "To see this many years later it's still so common in cans, that's a huge problem because we've only learned more and more about how harmful this chemical can be."

However Health Canada's Food Directorate issued a statement back in 2014 concluding that the current exposure to BPA through food packaging is not considered to be a health risk, even to infants and newborns.

This is echoed by the U.S. FDA's stance on the BPA issue. In its website, the agency acknowledged the points of concern raised by consumers. However, FDA maintains that in light of the current scientific evidence and available information, BPA is still safe in its approved uses for packaging and containers. The agency added that low-dose exposure, such as what might be obtained from the packaging components, has not shown any adverse health effects when tested by the National Center for Toxicological Research.

Yet, Environmental Defence and other groups insists that even low exposures such as parts per trillion can increase the risk of prostate and breast cancer, type-2 diabetes, asthma, obesity infertility as well as behavioral changes most notably attention-deficit disorder according to the CBC article.

For these reasons, the groups are pushing for national brands and even retailers to undertake the following:

1. Setting of a time frame for a total elimination of BPA by switching to safe substitutes in the lining of canned goods, containers, and other packaging.

2. The labeling of BPA's or BPA-alternatives' presence in the cans.

For now, the groups call on consumers to switch to fresh and frozen food items to be safe. If opting to use canned products, consumers should choose manufacturers that disclose the type and safety of their can linings.

There are already manufacturers that have switched or are in the processed of switching to BPA-free packaging. ConAgra Foods, Inc. already made the BPA-free switch last year while Del Monte announced it would start eliminating BPA this year. Campbell plans to stop using BPA containing cans by mid-2017.