Eating Pulses Can Lower Cholesterol Plus Reduce and Keep Weight Off, Says Study 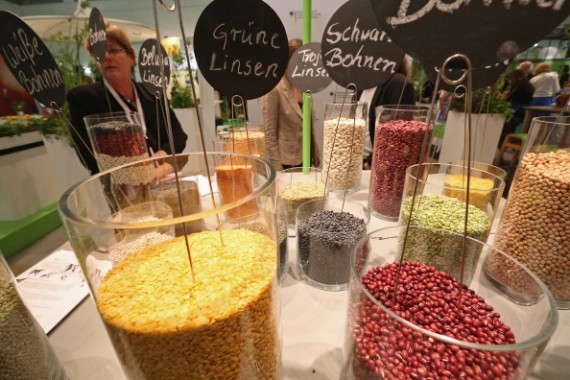 BERLIN, GERMANY - JANUARY 18: A visitor looks among organic pulses, including lentils and beans, at the 2013 Gruene Woche agricultural trade fair on January 18, 2013 in Berlin, Germany. The Gruene Woche, which is the world's largest agricultural trade fair, runs from January 18-27, and this year's partner country is Holland.
(Photo : (Photo by Sean Gallup/Getty Images)

Pulses or legumes are plants in the family Fabaceae long favored by the health conscious due to their low fat, high fiber, and protein content. Well-known legumes pulses include lentils, peanuts, soybeans, beans, peas, clover, lupines, alfalfa, tamarind, carob, and mesquite according to a Wikipedia article.

A new research offers new findings that should be convincing enough to add pulses to one's diet. By adding a mere 130 grams of beans, peas, lentils or whatever type of pulse one prefers to one's diet each day, the study guarantees it could make one stay trim and keep it that way according to an article in the Daily Mail by Colin Fernandez.

This is amazing because 130 grams is only about three-quarters of a cup and shouldn't be that hard to consume at all given the culinary versatility of legumes. What's even more amazing is that the slimming or weight reduction effect is noticeable even if one does not make any dietary changes other than the addition of pulses added Fernandez.

Li Ka Shing Knowledge Institute of St Michael's Hospital researcher Dr. Russell de Souza, the study's lead author, says there is room for incorporating pulses in one's daily meals to reap the potential weight management benefits of eating pulses. At the moment, Souza notes that only 13 percent of Canadians eat pulses despite their known health benefits according to an article by Paul Gallagher on Independent.

The study also showed that eating pulses can significantly reduce LDL also known as bad cholesterol. A five percent reduction of LDL levels was noted by the researchers which are a significant figure and helps lower the risk of cardiovascular disease.

The study reports that among 1,000 men and women they monitored, an average of 0.75lbs of weight reduction within six weeks was recorded by merely adding a single serving of pulses to the participants' diet according to the Independent.

Another significant point the study wants to highlight is that the weight loss happened even when no effort was done in cutting down on other foods. This should be welcome news for dieters who failed in the past because they can't stick to their highly restrictive previous diet programs.

Dr de Souza notes that 90 percent of dieters fail and result in weight regain because of hunger and food cravings. However, eating pulses should address that problem because they make one feel fuller and could stop those unneeded snacks.

According to Souza, intake of pulses creates an increased feeling of fullness by as much as 31 percent and could result in an overall lesser food intake. While other dieting programs will inevitably result to weight loss if followed to the letter, most dieters have a hard time maintaining the achieved weight. Pulses might just be the solution for a more effective long-term weight maintenance.

4 Surprising Foods That Cause Bad Breath