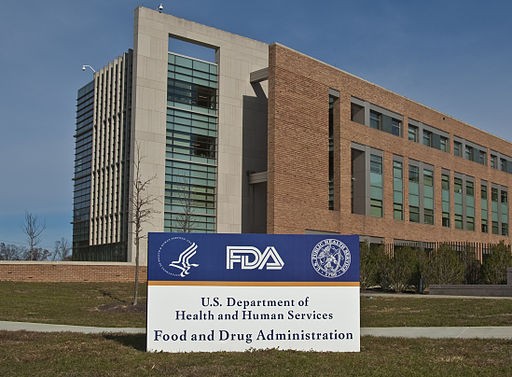 FDA Building 21 stands behind the sign at the campus's main entrance and houses the Center for Drug Evaluation and Research. The FDA campus is located at 10903 New Hampshire Ave., Silver Spring, MD 20993.
(Photo : The U.S. Food and Drug Administration/Wikimedia Commons)

A coalition of fishing and environmental groups sued the U.S. Food and Drug Administration (FDA) for its approval of the first-ever genetically engineered (GE) salmon according to a Huffington Post article by Chris D'Angelo.

The coalition, represented by Center for Food Safety and Earthjustice, expressed alarm at the FDA's approval of the genetically modified fish which is intended for human consumption citing that the decision to approve such fish not only violated the law, but also ignored possible risks to the unaltered wild salmon population.

The GE salmon was created by AquaBounty Technologies, Inc., and is a combination of the DNAs from three fish, namely the Atlantic salmon, Pacific king salmon and Arctic Ocean eelpout according to an article from Ecowatch. The genetically-modified salmon, engineered to grow quickly, is the first GE animal for commercial sale and consumption that was approved by any government in the world.

Center for Food Safety senior attorney George Kimbrell said, "FDA's decision is as unlawful as it is irresponsible. This case is about protecting our fisheries and ocean ecosystems from the foreseeable harms of the first-ever GE fish, harms FDA refused to even consider, let alone prevent. But it's also about the future of our food: FDA should not, and cannot, responsible regulate this GE animal, nor any future GE animals, by treating them as drugs under a 1938 law."

Apparently, around 2 million American opposed the approval of the GE fish, a public opinion that FDA ignored. According to Ecowatch, FDA failed to analyze the risk the GE fish poses to the wild salmon, the environment, and fishing communities.

For example, the altered salmon could possibly escape and threaten endangered wild salmon by competing with food resources and even introducing new diseases according to the HuffingtonPost article.

While AquaBounty plans to grow this fish inland and away from the ocean, the possibility of the GE fish escaping into the wild is an alarming prospect. Huffpost quoted Dune Lankard, a salmon fisherman, saying that "Once they escape, you can't put these transgenic fish back in the bag."

Center of Biological Diversity is likewise worried, releasing a statement that points out that if the GE fish cross-breed with other species, it may have unforseen irreversible impacts and could be a disaster for wild salmon.

Friends of the Earth campaigner Dana Perls said that despite FDA's reckless approval of the GE salmon, the market has already rejected it. Retailers like Kroger, Safeway and Costco don't plan on selling the fish while the vast majority of people don't want to eat it added Perls.