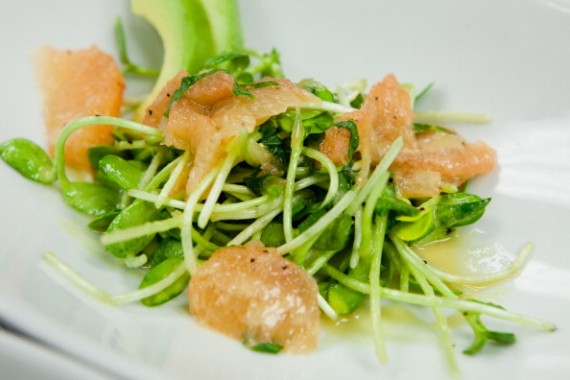 WASHINGTON - MARCH 19: A salad of sunflower sprouts, grapefruit, and avocado is ready to be served at a private raw food dinner for author Daphne Miller at Elizabeth's Gone Raw on March 19, 2011 in Washington, DC.
(Photo : Photo by Brendan Hoffman/Getty Images for Girl Behind The Camera)

Meat-eating versus veggie-eating is always going to be a controversial topic-yet it's an important subject. What we eat as individuals has a big impact on the biological state of the planet. So what will happen when those individual dietary options are pushed on a larger scale?

Through a video of different doodle art pieces called "What If The World Went Vegetarian," science website ASAPscience did just that, giving viewers a look at how a massive global shift to vegetarianism would impact the day-to-day lives of humans. It also tackled the effects of such a thing to animals and plants including what happens to the pastures used to raise cattle and the agrarian lands used to grow cattle food.

According to Food Beast, with food preparation and consumption standards falling in the past few years, there are reasons to believe a meat-less diet would bring in dramatic improvements in public health.

While others argue that plant-based diets also cause their own set of health deficiencies, but with a rather surprising amount of hardcore vegan athletes, politicians and celebrities in the world, it's crystal clear that it is at least perfectly possible to have a completely healthy, well-adjusted life following a disciplined vegan diet.

According to the Huffington Post, only about four to five percent of the American-Canadian population is fully vegetarian. While that may seem a small number in the grand scheme of things, that is actually equal to more or less 14 million, a lot more than the 3 million people estimated by Vegan Research Panel in both the U.S. and Canada who didn't eat meat 15 years ago.

Despite what we know about the environmental and health benefits of vegetarianism, it's not likely the whole world will one day up and abandon its meat-eating ways. But one can dream, right?