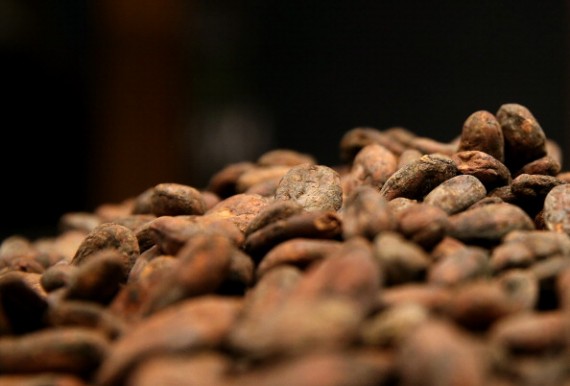 Whole cocoa beans sit in a bean room at Dandelion Chocolate on March 17, 2014 in San Francisco, California. A new study sponsored by the National Heart, Lung and Blood Institute and Mars Inc., and to be conducted at the Fred Hutchinson Cancer Research Center in Seattle will explore the efficacy of pills containing high concentrations of cocoa flavanols and how they can help prevent heart attacks and strokes.
(Photo : Justin Sullivan/Getty Images)

It has long been known that eating pulses is a healthy option for losing weight, but they have also now been proven and tested to keep the pounds off.

According to new research, as stated in the Independent, just quarters of a cupful - of beans, peas, chickpeas or lentils is enough to give to modest weight loss by making people feel fuller and by vastly reducing "bad cholesterol" levels.

Almost 1,000 adult men and women lost an average of 0.75lbs over six weeks by having an additional single serving of pulses to their diet.

The study also showed that the effects occurred with little effort at cutting down on other foods, unlike other weight loss programs.

According to Live Strong, there is another group of scientists at Indiana's Purdue University and Bastyr University in Washington State who asked volunteers to intake 30 percent fewer calories than normal, randomly assigning dieters to one of three eating plans. The first plan included 3 cups of beans and lentils, or pulses, per week, the second included nearly 2 cups of pulses a day for women and 3 for men, and the third included minimal amounts of pulses.

All three groups lost weight, but the dieters who consumed the most pulses shed the most pounds. The thrice-weekly bean/lentil eaters lost 7.5 pounds, those on the pulse-loaded diet lost 8.5 pounds, and those with the minimal pulse intake lost just 2 pounds after six weeks.

"Despite their known health benefits, only 13 per cent of Canadians eat pulses on any given day and most do not eat the full serving. So there is room for most of us to incorporate dietary pulses in our diet and realise potential weight management benefits," says Lead author Dr. Russell de Souza, a researcher with the Li Ka Shing Knowledge Institute of St Michael's Hospital in Toronto, Canada.