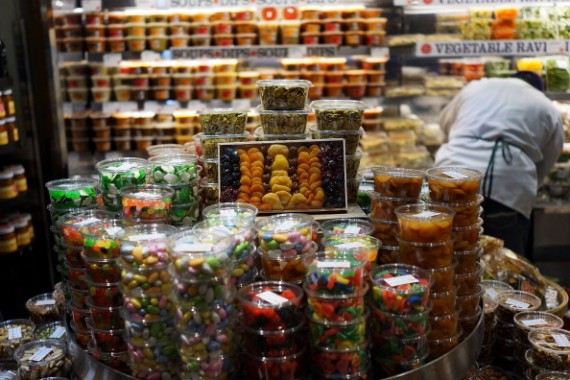 NEW YORK, NY - JANUARY 10: Items are displayed in a market on January 10, 2013 in New York City. A new London-based study by the The Institution of Mechanical Engineers found that as much as half of the food produced in the world ends up going to waste. The study found that irresponsible retailer and consumer behavior contributed to 1.2 billion to two billion of the four billion metric tons of food produced globally that goes uneaten.
(Photo : Photo by Spencer Platt/Getty Images)

While some areas face the problem of food shortage and famine, most of the world - especially the developed countries - face the opposite problem of excessive food waste. According to Food and Agriculture Organization (FAO), roughly a third of the world's food produced for human consumption goes to waste.

The problem is even more acute in the United States. According to the National Resources Defense Council (NRDC), Americans are such a wasteful lot with around 40 percent of their food heading to landfills.

Heartland Biogas collects wasted food from Colorado's most populous areas and uses it as its raw material. In a process called anaerobic digestion, bacteria convert spoiled food and cow manure into methane gas which is then converted into pipeline grade renewable natural gas (RNG) according to an NPR article by Luke Runyon.

The Sacramento Municipal Utility District purchases the RNG from Heartland in a 20-year agreement. Since Sacramento needs to meet a high state standard of using renewable energy sources for its energy demands, biogas producers help fill that need while addressing the food waste issue at the same time.

Recycling food for electricity is also an environmentally sound move. If left to the landfills, wasted food will eventually break down and release methane into the atmosphere. Methane, as a greenhouse gas, is said to be 21 times more potent the CO2. This means that letting the food rot in landfills could also contribute to global warming.

But the project is now without its critics. NRDC resource specialist Darby Hoover explains that many cities do not use biogas because building biogas generation facilities is expensive. In addition, there are concerns that the food waste recycling capability of the plant might encourage people to be more wasteful. According to Runyon's article, knowing that there is that facility could lessen the guilt of throwing food away.

Environmental Protection Agency (EPA) recycling expert Virginia Till asserts that it more important "to focus on reducing waste in the first place." But even Till had to concede that utilizing food that can't be eaten to produce renewable energy is admirable.