LGBT Couples Can Now Get Thrown Out of Mississippi Restaurants, Says New Law 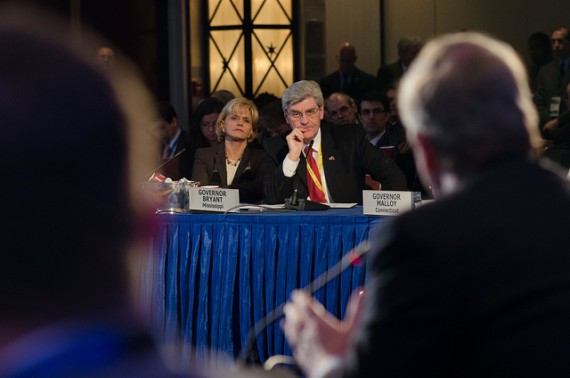 LGBT rights advocates suffered a setback with the new Mississippi "religious freedom" law recently enacted and set to take effect on July 1 this year. Mississippi Governor Phil Bryant signed a law that is said to allow businesses including restaurants to refuse service to gay couples for religious reasons according to a Restaurant Business article.

The new Mississippi law could also be used as a basis for government employees to refuse the issuance of marriage licenses and perform marriage ceremonies for gay couples. The far-reaching law also allows businesses to deny jobs, adoption, housing and foster care services simply because of one's sexual orientation according to an article in Los Angeles Times by Jenny Jarvie.

Also known as the "Protecting Freedom of Conscience from Government Discrimination Act," it may also be used by employers to cite religious reasons in setting up workplace policies on grooming, dress code and even on bathroom and locker access according to a Thompson Reuters article on CBC News.

The law is part of similar recent measures from other states after the U.S. Supreme Court legalized same-sex marriage last year. For example, North Carolina has a recently imposed ban on transgender individuals in choosing bathrooms based on their identity.

Reacting to the new law, American Civil Liberties Union (ACLU) of Mississippi executive director Jennifer Riley-Collins released a statement saying "This is a sad day for the state of Mississippi and for the thousand of Mississippians who can now be turned away from businesses, refused marriage licenses, or denied housing, essential services and needed care based on who they are."

Governor Bryant clarifies that the law is not an attempt to challenge federal laws. Bryant added that the law highlights the religious freedoms protected by the 1st Amendment and is an attempt to prevent government interference in the personal lives of people in the state according to LA Times.

U.S. businesses are generally against such legislations. For example, a coalition of more than 100 companies asked Governor Pat McCrory for the reversal of a similar law in North Carolina according to the Thomson Reuters article in CBC News.