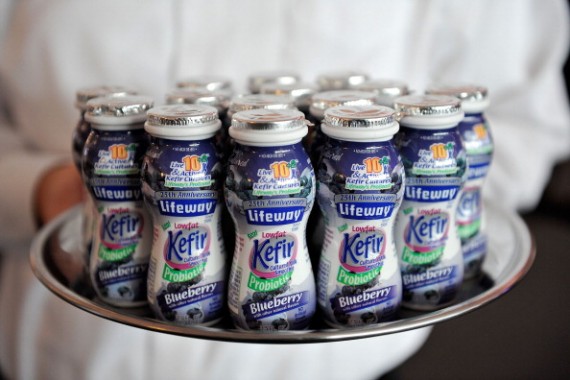 Everyone knows yogurt is healthy. With its probiotics content, yogurt has been shown to improve gut health and enhance one's immune system.

However, there is another fermented drink in town that might outshine yogurt's status as a health fermented food. Kefir, like yogurt, is made from cultured milk. Both yogurt and milk contain protein, calcium, potassium and B-vitamins according to a Doctors Health Press article by Soriyya Bawa.

The difference is in the blend of bacteria and yeast used in fermenting the drinks. To make yogurt, bacteria is used in the fermentation process. On the other hand, kefir uses both bacteria and yeast to create the drink according to a Live Science article by Michael Dhar.

While the bacteria in both yogurt and kefir converts the lactose in milk to lactic acid which accounts for the tangy flavor of both drinks, the additional yeast used in kefir manufacturing also converts some of the lactose to carbon dioxide, along with a minute amount of alcohol, giving the drink its carbonation. As a result, the bubbly kefir is often referred to as "the champagne of milk."

In addition, kefir also contains beneficial yeast which yogurt lacks. These yeasts, such as Saccharomyces kefir and Torula kefir are effective in overpowering and eventually eliminating pathogenic yeasts according to a Kefir.net article. In this role, the helpful yeasts form a virtual SWAT team penetrating the mucosal lining which is home to unhealthy bacteria and yeast. Ridding the intestines of these unwanted guests, the body becomes more resistant to pathogens like E. Coli and other parasites.

This means that the beneficial bacteria found in yogurt, while helpful, do not colonize or propagate in the digestive tract. These yogurt-based probiotics just pass through the gut and therefore requires a constant intake of the yogurt to maintain the health benefit yogurt offers.

On the other hand, the probiotic strains found in kefir do not just pass through the digestive system like probiotics from yogurt. In fact, kefir-based probiotics have the ability to colonize the intestinal track offering a lasting benefit. In addition, certain kefir strains are quite aggressive, able to successfully attack and eventually destroy harmful pathogens.

The health benefits of kefir are impressive as well. An article in Collective Evolution written by Amanda Harris-Logie mentions three ways kefir can aid the body.

Supports Bodily Functions - Kefir is said to improve the functioning of various organs like the gallbladder, liver and heart. In addition, kefir is noted to improve blood circulation as well as improve metabolism.

Anticancer - Remarkably, kefir is able to slow cancer cells growth in rats. While research in humans is still to be done, it is highly probable that the same anticancer effect could work in humans as well, due to kefir's various probiotics and its ability to enhance the body's immune system.

Antibacterial - Research has shown the kefir is able to prevent the grown of harmful pathogens such as Salmonella and E.Coli due to certain probiotics present in the drink.

From the information previously presented, it seems kefir really outshine yogurt in terms of health benefits. However, one does not need to give up yogurt entirely because it is perfectly safe to combine both healthy products.

The 10 Healthiest Fruits and Vegetables You Should Be Eating