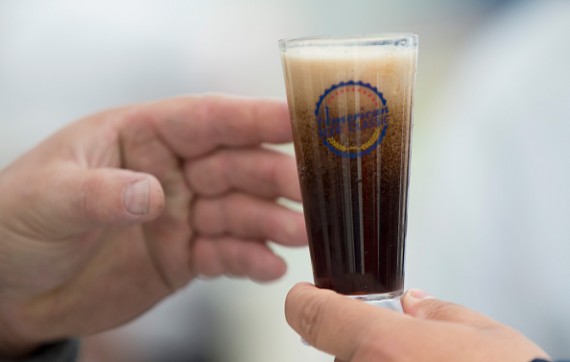 Small Town Brewery offers a sample of their Not Your Father's Root Beer spiced beer at the American Beer Classic craft beer festival at Soldier Field on May 9, 2015 in Chicago, Illinois.
(Photo : Scott Olson/Getty Images)

The increasing popularity of alcoholic root beer is literally giving cider a run for its money. In fact, with the demand for root beers rising, these not so inebriating beverages having about 5% to 7% ABV increasingly find place on menus at beer bars and even sophisticated restaurants.

In fact, many have already started wondering about the appeal of alcoholic root beer. The reasons are, however, not difficult to find. These beverages not only contain food-friendly alcohol levels like beer but also have a sweeter, spiced profile which is almost similar to that of a cocktail or soft drink. While the deep, dark molasses-and-spice essences appear just perfect for comfort-sipping during the windy weather months, they also serve as refreshing alcoholic root beer floats when the weather is warmer.

Having tasted alcoholic root beer and beer alongside to find how they measure, Liquor.com reported that in case you are not in favor of root beer, you may try alcopops like ginger ale, orange cream ale, and apple ale. Below is some of the new alcoholic root beer that finally lives up to the name.

Best Damn Brewing, owned by St. Louis-based beer giant Anheuser-Busch, offers each 12oz bottle (with 5.5% ABV) with a somewhat beer-like aroma. The flavor is something between beer and soda with a tinge of vanilla and a mild hoppy bitterness - somewhat medicinal, Rate Beer states.

This root beer is very much like beer at 5.5% ABV. It has been "botanically inspired craft beer" by the Chicago-base Forbidden Root Brewery. Unlike Best Damn Root Beer, which has a brownish hue, the color of this root beer is relatively light - more amber-like instead of deep brown. Far from being sweet, Forbidden Root Beer is slightly herbaceous.

Not Your Father's Root Beer

This alcoholic beverage is perfect for those who loathe beer. Offered by Small Town Brewery in La Crosse, Wis., apparently this fizzy easy drinker is the most widely available. Among all the sampled root beers, at 5.9% ABV, this beverage is the sweetest and very akin to soda. In fact, it never seems to be an alcoholic cousin to beer.

This is the only alcoholic root beer available in a can. Offered by Memphis' Root Sellers, at 6.7% ABV, this root beer has a foamy pour and a gentle roots-and-bark aroma and savor with only a little hint of cane sugar sweetness.