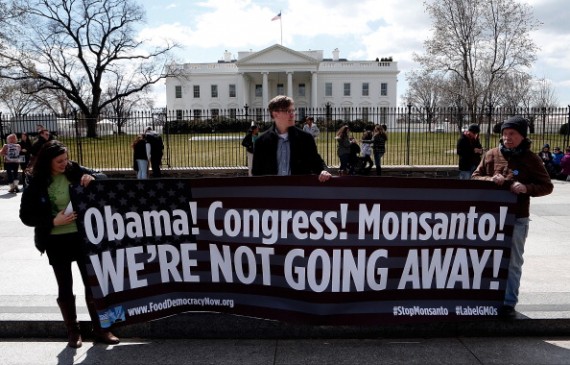 WASHINGTON, DC - MARCH 27: Activists protest against agricultural biotech company Monsanto outside the White House on March 27, 2013 in Washington, DC. Monsanto, which engineers genetically modified seeds, recently benefited from a section buried in the latest budget bill that allows the agribusiness giant to plant genetically-modified crops without judicial review to determine whether or not their crops are safe.
(Photo : Photo by Win McNamee/Getty Images)

Biological Agriculture (BioAg) or biological farming could be the saving grace of Monsanto's damaged reputation while solving the predicted global food crisis and putting money in its coffers in the process.

BioAg or biological farming is a farming technique that aims to balance the physical (soil structure), chemical nutrients and biological aspects of the soil to increase productivity while maintaining soil health. Monsanto entered into a BioAg partnership with Danish company Novozymes which already has existing products such as Jumpstart, a bacteria that helps plant roots absorb more phosphorus from the soil.

BioAg can be seen as a non-chemical way of increase agricultural yield. This is achieved by coating seeds with certain microbes which enable the growing plant to absorb more nutrients from the soil, use water more efficiently and could offer some sort of protection against pests and diseases according to a Market Watch article by Sarah Sjolin.

Monsanto President and chief operating officer Brett Begemann is betting that by 2050 the world's population would increase by 2 billion, burgeoning to 9.6 billion people. Factoring in the more pronounced effects of climate change by then such as scarcer water and a hotter climate, along with degraded agricultural land, the increased population would put more pressure on farmers and governments to increase the productivity of increasingly limited arable lands.

Even the United Nations Food and Agriculture Organization (FAO) agree with this assessment.  According to FAO, farmers in 2050 will need to produce 70 percent more food to sustain the projected population increase, a tricky problem to solve because by then, it projects that most farmlands will be significantly degraded in terms of soil quality.

In this bleak scenario, microbes and BioAg might be a significant part of the solution. Iowa State University biology professor Gwyn Beattie explains that microbes could restore soil quality to a more productive state according to the Market Watch article.

Another advantage of using microbes is that they could be deployed without resorting to chemical fertilizers and is, therefore, a more environmentally sound option. In addition, there is always that possibility that as more research is poured into BioAg by future players, new and more effective methods might be discovered which could potentially increase crop yields without harming the environment and soil quality, the perfect "sustainable intensification" FAO is looking for.

Monsanto's entry into the non-chemical BioAg market could help paint a more positive company image for the chemical giant. Monsanto has suffered publish backlash due to its introduction of genetically-modified crops earning it the 2013 most evil company in a Natural News poll.

However, Begemann was quick to clarify that the company's entry into BioAg is not some publicity stunt aimed to counter negative public opinion. Begemann explained that the company's microbes thrust were solely aimed at providing farmers another option to increase yields.

But some scientists are still hesitant to embrace the BioAg Alliance path too soon. According to an article in Modern Farmer by Sam Brasch, "microbiologists advocate a complete census of all fungi, bacteria, insects, viruses and their interactions around a single crop" before putting up a product for sale. For these microbiologists, such a complicated but necessary task might not be a priority of commercial ventures like the BioAg Alliance between Monsanto and Novozymes who might want to come up with a marketable products line as soon as possible.

Such cautious stance among scientists is, of course, not unwarranted. After all, if the global community dives head first into the BioAg agenda without assessing possible risk scenarios beforehand, it would be like trading a chemically disastrous future for a possible biological nightmare due to microbial imbalance on a global scale.