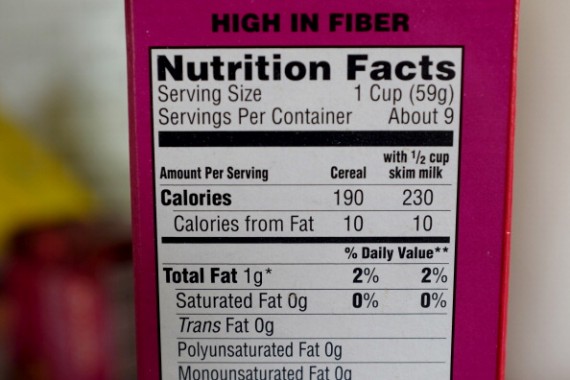 MIAMI, FL - FEBRUARY 27: Nutrition labels are seen on food packaging on February 27, 2014 in Miami, Florida. The Food and Drug Administration is proposing several changes to the nutrition labels to make it easier for consumers to understand the nutritional value of the food they buy.
(Photo : Photo by Joe Raedle/Getty Images)

If you were to choose between two cookies and you know that one cookie requires you to run 10 minutes to burn off its calories while the other one has enough calories that you can burn after a 20-minute run, which would you choose?

In essence, that is the method of attack proposed by Shirley Cramer to address the soaring obesity rates in UK wherein two-thirds of the population are either overweight or obese. Cramer, Royal Society for Public Health in London chief executive, is pushing for food labels to include how much exercise is necessary to expend the calories contained in the food according to a CBC article by Kas Roussy.

Known as "activity-equivalent calorie labeling," it is based on the premise that it takes only around 6 seconds for buyers to make a decision on what products to buy. However, the current nutritional labeling is "too confusing", with all the information it contains, is just too much to make sense of in the 6-second decision-making window.  According to Cramer, a way to solve this is to catch buyers' attention with a graphic illustration of how much exercise they'll need to do if they will consume the food item being considered.

And people in the UK like the idea. A Royal Society survey revealed that two-thirds of its 2,000 respondents support the new activity-equivalent calorie labeling. In addition, more than half of the respondents confirm that they would positively change their buying choices if they saw that type of label.

While more researches are needed to ascertain the effects of physical activity labeling, the few studies done on the subject show positive result according to a CNN article by Carina Storrs. For example, a study done by Anthony Viera and Ray Antonelli published in Pediatrics show physical activity calorie equivalents (PACE) labeling influenced the parents' decisions on which menu items to buy for their children. In addition, parents who were shown PACE menu are more likely to encourage their children to exercise.

Another study cited by the CNN article also supports the theory and has shown that PACE labeling affects shopping decisions. Researchers compared the difference between signs simply stating the calorie content and signs that tell buyers that they need to run for 50 minutes to expend the calories contained in juices and sodas. The researchers found out that teens bought fewer bottles soda or fruit juices when they saw the signs that say they need to run for 50 minutes, which show the positive effect of PACE labeling.

However, not everyone agrees with this type of labeling. In an interview with CBC, Dr. Yoni Freedhoff, a medical director of the Bariatric Medical Institute located in Ottawa explains that the activity calorie labeling would perpetuate the wrong notion that exercise and weight are closely linked.

Dr. Freedhoff asserts that a person's eating habits are a greater factor in determining his weight and not exercise. Dr. Freedhoff adds, "Calories consumed outweigh the calories exercised. For the most part, you cannot outrun your fork."