Morning Coffee in Space and Other Daily Routines of NASA Astronauts 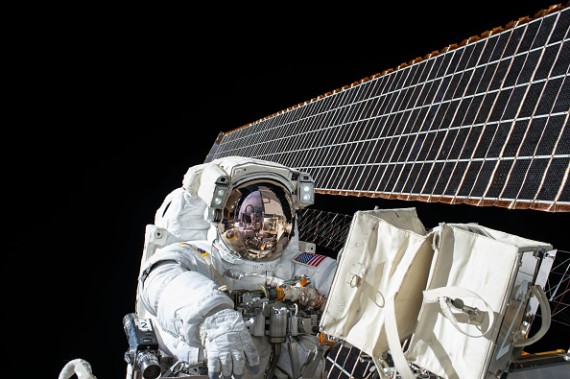 n this handout photo provided by NASA, NASA astronaut Scott Kelly works outside of the International Space Station during a spacewalk on November 6, 2015 in space.

One can't help but wonder how a day is spent for those lucky few space-faring astronauts, probably a dream career for most boys and girls while growing up. Yet surprisingly, a NASA astronaut reveals that their typical day is spent doing things most of the earth-bound population are also doing.

NASA flight engineer Jeff Williams has been an astronaut since 1996. Currently stationed at the International Space Station (ISS), he revealed what his usual morning is like in space in an interview with Today.com.

Obviously, the ISS's crew cannot rely on the rising and setting of the sun like the rest of the population because the space station orbits the earth in every 90 minutes according to NASA. This means that the station circles the earth around 16 times in a 24-hour period and ISS inhabitants would probably see the same amout of the sun's rising and setting in the same period.

As reference, the ISS uses the Greenwich Mean Time and their day usually starts at 6 AM or a bit earlier. Upon waking up, the first thing that Williams reaches out for is his morning coffee, which is probably the same for most coffee lovers worldwide.

Williams reveals that it is also his routine back on earth. However, the quality of coffee available for astronauts has significantly improved only recently. Eater reported that, an Italian astronaut could not stomach the quality of coffee then in the ISS which prompted Lavazza, Argotec and the Italian Space Agency to design Isspresso, an espresso dispensing machine that is functional even in space.

As for breakfast, everything is packaged and ready to eat. No, they probably would not be able to show off any cooking skills in the ISS because everything is just packed and microwavable. As it should be; nobody would probably want maple syrup indefinitely floating around the cabin in zero gravity.

Based on Williams' revelation, it is easy to see that these high-flying astronauts basically want what the rest of the world wants every morning: a good coffee and an easy to prepare breakfast but without the syrup of course.